THE RESCUE OF A LION!

KWS and Born Free teams rescued a lion that had been injured by another lion during a vicious fight in Meru National Park. The two have been battling for about two months over the Mulika pride, some of the lions being tracked and monitored by Born Free.

Aged 10 years, he was no match for the younger and stronger lion staging a takeover of the pride. The younger one also had the support from some members of the pride and they bit and tore into him, leaving him with battered, wounded sans his pride and the pride he had headed for three years. 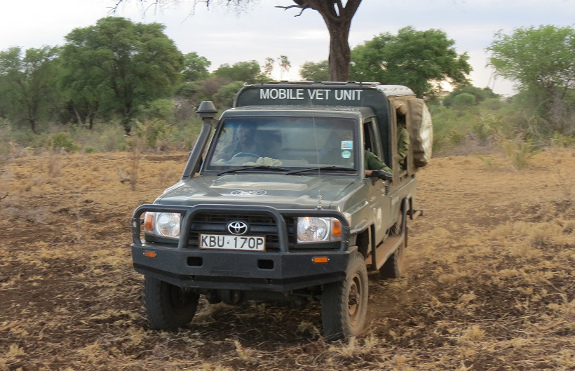 The vet team that covers Meru Park was away on assignment in the neighbouring county of Isiolo when they received a call that the injured lion had been spotted in the Park.

On arrival in Meru, they go straight to the site where the lion was sleeping under a tree, observe it for a few minutes before moving to an area where they can prepare the drugs.

Once the dart was ready, they drive to where the lion is sleeping and dart it in less than a minute. In 10 minutes, the drugs take effect and it’s time to start the operation. 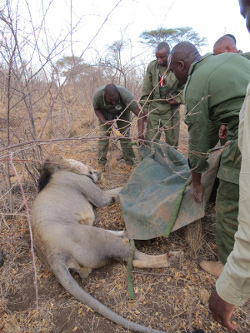 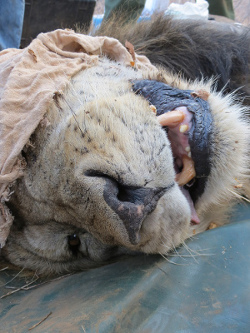 Meru has thick bush comparable to other areas like Maasai Mara. The lion lays unconscious in the midst of the bush and the team has to cut down some of the shrubs to clear the area. He is then placed on a canvas and his eyes covered with a cloth.

The wounds are first cleaned with water and then swabbed with a disinfectant and iodine. He has bites that have torn through one paw, and more tears on both forelegs, one hind leg and lower inner jaw.

Once the wounds are clean, a powdery antibiotic ash called green clay is mixed with water and applied on the wounds.

The vet and his team check the lion’s general health state, take tissue and blood samples as well as administer anti-parasitic drugs.  Scientists and assistants take physical bio-data such as length, height, paw size and weight. They check the teeth and claws too. Photos of whiskers are also taken for ease of identification. 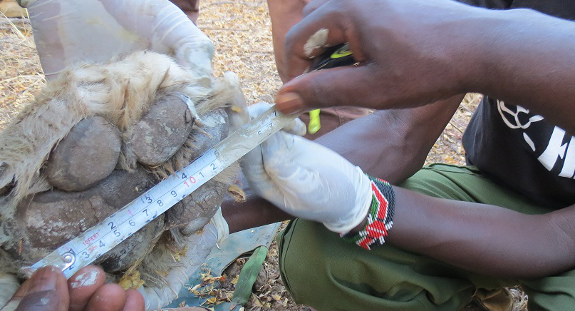 Once the vet confirms that the treatment is complete, he orders everyone into the safety of their vehicles as he and one member of his team remain with the lion. They then administer the reversal drug and move to their vehicle, a few metres away from the anim

We keep a close eye on the lion for signs of consciousness. And as darkness starts to fall over Meru, the lion groggily struggles to raise his head.  We observe him for another five minutes and the vet gives a thumbs up. It has taken slightly more than an hour from darting to revival of this lion. Operation successful!

Both Born Free and KWS scientists will continue to track and monitor him to ensure that he is fully back on his feet again. 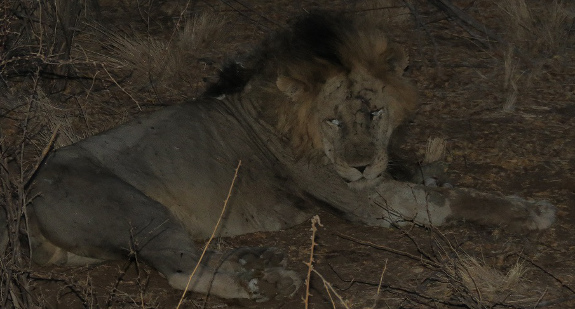 DONATE TO THIS PROJECT