Born Free is horrified by reports that a four-year-old girl was attacked by a lioness at a lion farm in South Africa.

According to reports, the lioness reached for the girl and her father through a fence at Weltevrede Lion Farm, reportedly tearing off the girl’s scalp. The family were visiting the farm to take part in lion cub petting.

Born Free is firmly opposed to the exploitation and keeping of wild animals in captivity. The intensive breeding of lions and other predators on commercial farms in South Africa is particularly horrific. Upwards of 8,000 captive-bred lions are kept in 260 or more breeding facilities across South Africa, where they are exploited for profit at every stage of their lives. Unwitting tourists are drawn in to pet cubs or walk with lions. The ultimate fate for many of these animals is to be shot in canned hunts, or to be slaughtered so their bones can be exported for use in bogus medicines and tonics.

Dr Chris Draper, Born Free’s Head of Animal Welfare & Captivity, said: “This appalling incident highlights the enormous risks associated with being close to dangerous wild animals, even in captivity. The captive lion industry in Southern Africa is exceptionally cruel, to the animals involved and in its exploitation of trusting and ill-informed tourists. The blame for what happened to this little girl lies squarely at the feet of the lion farm and the captive lion industry, and they should be held to account.” 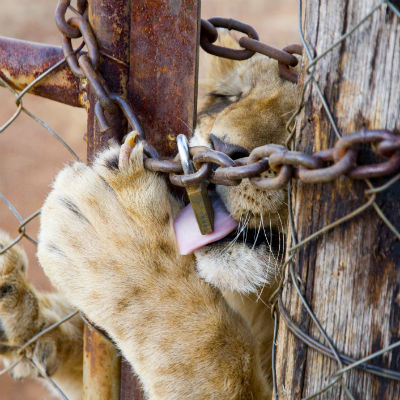