In celebration of World Lion Day (Saturday 10th August), we are delighted to announce we will relocate not one, but eight rescued lions by the end of this year.

This is the biggest lion rescue and relocation since we were founded in 1984. For the Lions of Lyon – Horus, Dadou, Thea, Cersei – as well as Hilts, Alpha, Cora, and Amalia, it will be the start of life as it should be. They will live out the rest of their days in protected sanctuaries across Africa – their native home.

While we have made the conscious decision to keep these lions’ current and soon-to-be new locations undisclosed in order to protect their welfare, we can reveal they were all at risk in captivity: including exploitation as tourist attractions, private pets or part of canned hunting facilities in various countries around the world. 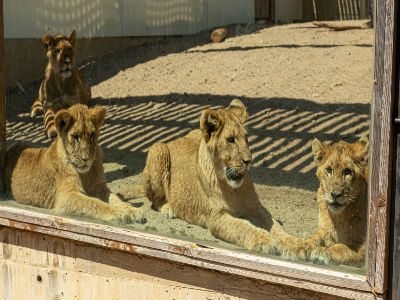 Taking on such a large relocation effort from different countries, in just a few months, is no mean feat for our team. “Understanding the political sensitivities of these cases in each country, working with authorities, arranging paperwork and visas for the animals to fly from one country to another through international airspace – it’s all a logistical minefield, but it’s totally worth it when you watch a captive animal settle into a new life free from harm,” said Dr Chris Draper, Head of Animal Welfare & Captivity at Born Free.

“Wild animals have extremely complex social, physical and behavioural needs and are, therefore, particularly susceptible to suffering when kept in captivity. The tragic stories of the lions we are rescuing this year are the direct result of the appalling and continued demand for wild animals as pets and in circuses, as well as canned hunting and breeding facilities where it is estimated that up to 8,000 lions could be being kept in South Africa alone.

“We are one step closer to success by being able to help these eight magnificent lions this year, but we will never stop campaigning to stamp out the exotic pet market, illegal wildlife trade, trophy and canned hunting, and captivity in general – wildlife belongs in the wild.”