At the end of last week, we received a report that a lion had injured a community member from Gafarsa Village in Isiolo County. And with that, the KWS Meru Park and Born Free teams set off to the village located some 110 kilometres from the Park. The area is hot, dusty and savannah with harsh landscape of enormous rocks and dry flora species such as Acacia tortilis.

Despite the extreme climatic and topographical conditions, the pastoral Borana community teems with life in this land they call home.  We found Mohammed Seresi, the lion attack victim, resting at home after being treated from the local hospital. He had been bitten by the lion as he slept in his homestead. Luckily, the lion took off after he shouted in pain and called for help.

The area chief who is the local administrator had then convened the community members for our team to engage with them. Pauline Okode, Meru Education Warden, addressed the community after commiserating with Mr. Seresi and his family. She spoke on human-wildlife conflict, the importance of reporting conflict incidences immediately to the relevant authorities and the compensation process as per the Kenyan laws. Ms. Okode also stated the importance of our country’s wildlife heritage. 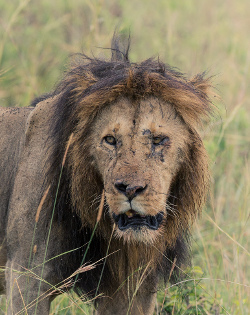 The area chief then thanked KWS for their swift response and the community’s interest in conserving wildlife and their ecosystem. All in all, in spite of the tough circumstances, the community echoed by agreeing to join hands in protecting wildlife for future generations.