In 1979, there were some 1.3 million elephants in Africa, but now a new transcontinental survey - the most comprehensive ever to have been undertaken for elephants - has shown that there are less than 400,000 savannah elephants, one of Africa’s two species of elephant.

Born Free has been campaigning for more than 30 years to stop the illicit trade in ivory to protect and conserve Africa’s elephants. Will Travers OBE, President and CEO of the Born Free Foundation, said: “This new survey confirms that Africa’s elephants are in a devastating spiral of decline. In spite of most being within protected areas, they continue to be gunned down. The time for yet more debate is long past – the trade in and demand for ivory must be brought to an end. It’s vital that all ivory markets, both domestic and international, are shut down without delay and that the criminal elements behind the bloody ivory business are dismantled.

In 1989, Born Free - representing the overwhelming majority of British citizens - was one of the many organisations to push for, and succeed in securing, the worldwide ban on ivory trading between countries. However, starting in 1997, measures to progressively weaken the ban were brought into play. Legal wholesale auctions of ivory were held and well-organised international criminal syndicates seized their opportunity to meet the rising demand for ivory in East and South East Asia.

Born Free has relentlessly joined the chorus of voices calling for a reinstatement of the ban, and later this month will send a delegation to the Convention on International Trade in Endangered Species (CITES) Conference of Parties where a proposal from 13 countries will be on the table aimed at restoring the highest level of protection that CITES can bestow to the elephants of South Africa, Nambia, Botswana and Zimbabwe, thereby banning all possibility of legal, commercial international ivory trade.

Travers added: “Without resolute, global action now more individual elephants will be slaughtered, elephant calves will be orphaned, rangers will lose their lives, poachers' mothers will lose their children and criminals will prosper. Born Free will do all in its power to bring this to an end. It is time we all declared our support for elephants, condemned the ivory trade and supported the great majority of African nations who want to see CITES to throw all of Africa's elephants a final lifeline.”

The findings of the new survey follow the publication earlier this week of a new report that revealed forest elephants, Africa’s other elephant species, are among the world’s slowest reproducing animals, with females taking more than 20 years to reach reproductive age, giving birth just once every five-six years. For a species that suffered a crippling 62% decline between 2002 and 2011, this means it may take as long as 100 years for forest elephants to reach turn of the century levels.

For more information on the ivory trade see www.bloodyivory.org 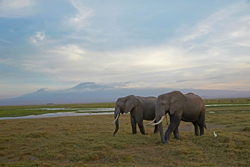