LEOPARD ESCAPES FROM A PRIVATE COLLECTION IN GREAT TREVERRAN, CORNWALL

Devon and Cornwall Police have confirmed that a clouded leopard has escaped from a private collection, reporting that the animal escaped on Boxing Day before being recaptured following reports that sheep had been killed in the area.

A spokeswoman for Cornwall Council also confirmed that the owner has a licence to keep the clouded leopard, and that "a full audit of the premises and licence has been undertaken and the circumstances surrounding the escape fully investigated.’’

Most of us would not imagine that such dangerous wild animals are kept in homes across the UK, yet Born Free has uncovered that, shockingly, 35% of local authorities in England, Scotland and Wales have issued at least one licence for private individuals to keep animals covered by the Dangerous Wild Animals Act 1976. This Act requires owners to obtain a licence from their local authority to keep animals categorised as dangerous, such as big cats, most species of primate, venomous reptiles and spiders, and others. 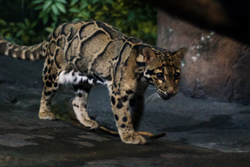 Born Free is concerned that these animals are vulnerable to welfare problems, especially when kept in a domestic environment. They have complex, social, physical and behavioural needs which require specific housing, temperature, humidity and dietary requirements, and furthermore they represent a significant risk to their owners and the wider public.

Born Free has undertaken an investigation into the extent of the keeping of dangerous wild animals in Britain, to be launched soon…