On World Lion Day (10th August), Born Free, calls for tighter legal controls and greater compassion, in its bid to protect lions from the vile so-called ‘sport’ of trophy hunting. Without resolute action, the charity fears that lions may become extinct in the wild across much of their current range.

Lions are in serious decline across most of the African Continent. As few as 20,000 remain and scientists predict that if no action is taken to protect them, numbers could fall by a further 50% in the next 20 years.

Recent harrowing headlines have brought the controversial practice of trophy hunting - killing for ‘fun’ - to the fore. Last month, Xanda – the son of Cecil the lion, killed two years ago by American dentist Walter Palmer – was shot and killed by trophy hunters just outside Hwange National Park, Zimbabwe, leading to a global outcry.

Three weeks ago, South Africa’s Department of Environmental Affairs declared its intention to designate an annual export quota to South East Asia of 800 skeletons from captive-bred lions, in spite of calls from the global conservation and animal welfare community for the captive breeding industry to be closed down.

In late July, the billionaire owner of Arsenal Football Club, Stan Kroenke, launched a new adventure channel in the UK called My Outdoor TV. However, a week later, following widespread condemnation, Mr Kroenke announced trophy hunting and blood-sports content would be removed from the channel.

This week, Kebbel – one of the last desert-adapted lions in Namibia – was saved from summary execution after the announcement that he was available for trophy hunting - with a £65,000 price on his head – was withdrawn.

Actress, Virginia McKenna OBE, Born Free’s Founder, said: "In my lifetime, the number of African lions has fallen from more than half a million to less than 20,000, and yet this iconic species continues to be hunted for trophies to put on walls or floors."

Born Free is wholly-opposed to the killing of animals for sport or pleasure, whether they are wild-born or bred in captivity. Its ongoing efforts to eventually end this practice include promoting the introduction of tighter import restrictions for trophies or import bans (as is now the case for lion trophies in Australia); encouraging countries that still allow trophy hunting to restrict or ban the practice; and supporting countries, such as Kenya and Botswana, that do not permit killing wild animals for ‘sport’ - Kenya ceased trophy hunting in 1977 and Botswana in 2014.

Born Free’s President, Will Travers OBE, continued: “Lions are in free-fall. Yet, there are those with a warped, crazy logic that think they can have their cake and eat it too - that killing lions for ‘fun’ is conservation.  We must recognise that lions are not just national or international treasures, but natural treasures that belong to the world. We all need to step up and find ways to fund wildlife conservation - including lions - without taking lives… before it’s too late.” 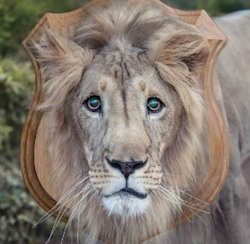