Born Free is urging all antiques traders to stop trading in items containing rhino horn, and is asking the UK and EU authorities to implement a total ban, after two libation cups - carved from rhino horn and claimed to be 17th or 18th century - were sold at Denham’s Auctioneers in Warnham, West Sussex, for £22,000 and £20,000 on 28th February.

Commercial trade in rhino horn, and items made from it, is an extremely controversial issue. Demand for rhino horn in parts of Asia, as a component of traditional medicines or tonics, and more recently as a prestige gift or investment, is threatening the very future of this ancient species. Since 2013, according to official figures, nearly 5,500 rhinos have been killed by poachers in South Africa alone, in order to supply criminal gangs with horn to smuggle into lucrative illegal markets. Only around 29,000 rhinos, of the five remaining species, persist across parts of Africa and Asia, and many experts predict that if demand for rhino horn continues at this rate some rhino species and populations could disappear altogether in the coming years.

Will Travers OBE, President and Co-Founder of Born Free, said: “There is no suggestion that by selling the two items, Denhams has done anything illegal. However, the fact that items consisting of or containing rhino horn can be traded commercially at all is extremely concerning. At a time when the UK is considering measures to effectively close all commercial trade in elephant ivory, it seems incongruous, inconsistent  and, indeed, immoral for any rhino horn sales – antique or not – to be permitted.”

The sheer value of trafficked horn, made of keratin, a material similar to human finger nails, has led to the smuggling of horns under the guise of trophy hunting in South Africa, and the theft of horns from museums, galleries, and even zoos in the UK and across Europe. It has also resulted in increased interest in ‘antique’ items made from or containing rhino horn, particularly among Asian buyers.

Concerns about the impact of rhino horn trade on the world’s beleaguered rhinos led to the implementation of strict measures by the UK government to control the trade in and export of rhino horn products. This, in turn, resulted in changes in the rules across the European Union. Under current rules, only rhino horn in the form of worked antique items (pre-1947 under current legislation) can be traded commercially. The onus is on the seller to provide proof of provenance, and the item must sell for substantially more than the value of the weight of rhino horn it contains, in order to ensure the item isn’t simply ground down and the horn sold into illegal markets.

However, while mechanisms are in place in the UK to check on the provenance and value of antique rhino horn items that are to be exported outside the EU, no such official checks exist for items that are sold to UK- or EU-based buyers and no certificates are required. This raises serious concerns that rhino horn, in the form of genuine or fake antiques, might be traded, smuggled out of the country, and used for illicit purposes that could further stimulate demand in Asian countries and increase the incentives for criminal gangs to go after live rhinos.

Travers added: “Ultimately, rhinos will only have a long term future if we can end the demand for rhino horn. Ending the commercial trade in all items made from or containing rhino horn – for good – would be one step towards achieving that objective means." 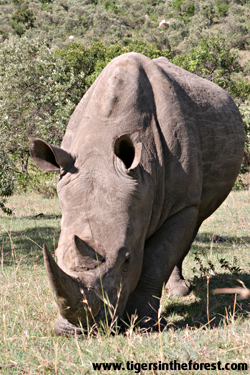