Born Free is perhaps best-known for its work with big cats, but this week came to the aid of a frightened kingfisher, after it was found injured in a Horsham back garden on Friday 15th December.

A local resident was shocked to discover that the beautiful bird had been caught by a cat, but quickly scooped it up, and rushed it to Farthings Veterinary Surgery in Guildford Road, where it was assessed and kept safe for the afternoon.

The surgery then contacted Born Free’s Tarnya Knight, who has a long history of rescuing and re-habilitating British wildlife, and often looks after injured birds and animals before they can be placed at wildlife rescue facilities for rehabilitation and release back into the wild.

Despite Tarnya’s experience of all manner of wildlife rescues, the kingfisher was a first for her. She said: “She was lovely – I was struck by her amazing orange legs! They are such fragile creatures and sometimes the stress of being in captivity can be too much for them to survive, so we were all hoping she’d pull through.”

Surprisingly, kingfishers are fairly common around the British countryside, and locally they can be found at Warnham Nature Reserve. However, those hoping to spot their electric blue and orange plumage are advised to be patient, as they are incredibly elusive! 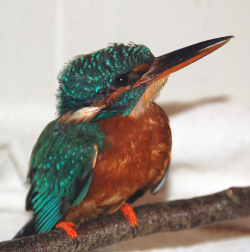 Tarnya continues: “The kingfisher was taken to Folly Wildlife Rescue in Kent where she will receive the expert care and attention she needs. The latest update is that she is very bright and feeding well and hopefully will be released back to where she was found soon.”