From a squalid cage in a Paris apartment to the African bush, King has been in his new home at our big cat sanctuary in Shamwari, South Africa, for just over two weeks.

We are delighted by his progress, and he is settling in well.

The animal care team at our Jean Byrd Rescue Centre where he now lives have reported that he is very inquisitive and loves his food!

Glen Vena, Born Free’s Animal Care Manager, said: “All is good, and King looks great. King has been out and about, relaxing in the cooler weather in the afternoon.

"He is becoming more relaxed, and can often be found by his water trough or under his jungle gym. He takes his food and runs with it into his shelter to enjoy quietly.”

We would like to thank everyone who made King’s move to South Africa possible – you have made a real difference to our little cub with the mighty name!

King was an innocent victim of the exotic pet trade. The keeping of wild animals as pets is a growing concern – and not just an international problem.

Recent data released by Born Free revealed there are 4,798 dangerous wild animals currently licensed for private keeping in Great Britain. Click on our interactive map to see if there are any near you. 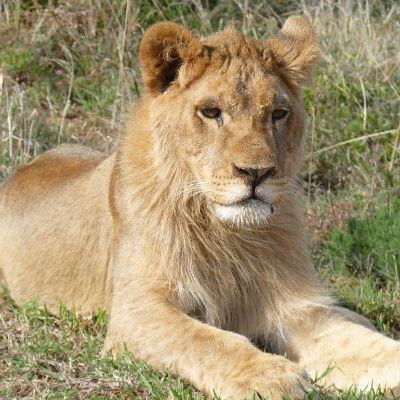