Born Free is delighted to announce that King – a tiny cub with a mighty name – is starting a new life in his ancestral home of Africa.

King is a one-year-old lion cub who was rescued from an apartment in Paris last summer where he was being kept illegally as an ‘exotic pet’ in appalling conditions. Following a successful appeal launched in April, Born Free will now provide King with lifetime care at its Big Cat Rescue Centre at Shamwari Private Game Reserve, in the Eastern Cape of South Africa.

King started his journey from Natuurhulpcentrum rescue centre, Belgium, on Thursday 5th July. From Belgium, he travelled under the care of Born Free’s expert team to London Heathrow airport for a flight to Africa, courtesy of Kenya Airways. After a short internal flight, King touched down in Port Elizabeth, South Africa, before travelling the short distance by road to Shamwari and to his new home at Born Free’s Jean Byrd Centre.

Virginia McKenna OBE, Born Free’s Co-Founder and Trustee, said: “I am sure there will be a lot of smiling faces today! So many people responded to our appeal to bring young King to Shamwari, and now he has arrived! Thanks to everyone whose hearts were touched by his story, he now takes his first steps on African soil, and can begin his happy new life.  May it be a long and peaceful one.”

Shamwari has been home to Born Free’s two Big Cat Rescue Centres for more than 20 years. 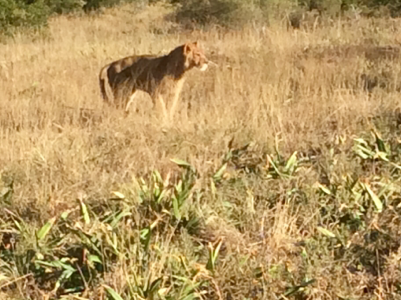 Comments Group General Manager, Joe Cloete, said: “To be able to welcome King to his new home is incredibly heart-warming for us, especially so during our refurbishment process, of not only some of the lodges, but the Born Free Centre itself. Conserving a vanishing way of life and educating guests on the importance of living in harmony with nature and wildlife is what we strive for at Shamwari Private Game Reserve.”

Born Free’s Corporate Partner, Kenya Airways, flew King to Africa. Katrina Hanson, Kenya Airways’ Area Cargo Manager, said: “We were delighted to assist in King's amazing relocation to Born Free’s Big Cat Rescue Centre at Shamwari in South Africa. We have worked with Born Free for many years carrying rescued lions from Europe to Africa so they can enjoy being a lion. These relocations have been a great success and we do all we can to make it as stress free as possible for the lions. Kenya Airways’ cargo facilities at Heathrow and across our network are fantastic for animal welfare from the smallest and domestic, to the mightiest of beasts! We were delighted to have King on board."

The sad story of King before he was rescued highlights the plight of millions of captive wild animals around the world that are kept as exotic pets. Born Free opposes the keeping of wild animals as pets. Wild animals, whether they have been taken from the wild or bred in captivity, have extremely complex social, physical and behavioural needs and are, therefore, particularly susceptible to suffer when kept as pets.

Dr Chris Draper, Born Free’s Head of Animal Welfare & Captivity, added: “It is staggering that, in 2018, lion cubs are still finding their way into the pet trade in Europe. We are concerned that King’s case is the tip of the iceberg, and that a great many wild animals are being kept illegally as pets across Europe and elsewhere. This situation needs to be addressed urgently, and we hope that by introducing the world to King – his plight, his rescue and his rehoming to lifetime care – Born Free can draw attention to this important issue.”