Born Free is delighted that King – the lion cub with a mighty name – has won the Animal Rescue Award at the Daily Mirror Animal Hero Awards.

King is a one-year-old cub who was rescued from a Paris apartment last summer where he was being kept illegally as an exotic pet in appalling conditions. In July, following a successful appeal, Born Free moved King to his new home at its big cat sanctuary in South Africa.

Chris Draper, Born Free’s Head of Animal Welfare & Captivity, said: “We are honoured to accept this award on behalf of King and are so grateful to everyone who made his move to our big cat sanctuary possible. King will now live free from harm in a large, natural bush enclosure, but millions of wild animals around the world who are kept as exotic pets are not so fortunate. We dedicate this award to them and hope that by introducing the world to King – his plight, his rescue and his rehoming to lifetime care – Born Free can draw attention to, and take action against, the exotic pet trade.”

We would like to thank all of our supporters for their overwhelming generosity that made King’s move to South Africa possible, and to all those who have chosen to adopt King to help fund his lifetime care.

We would also like to thank French animal charities Fondation 30 Million d’Amis and Refuge de l’Arche for rescuing King from the apartment; Natuurhulpcentrum rescue centre for rehabilitating King; Kenya Airways and Air Partners for flying King to Africa; and Shamwari Private Game Reserve for their continued support for our big cat sanctuaries and expert care of our lions and leopards.

FIND OUT MORE ABOUT THE EXOTIC PET TRADE     KING’S STORY 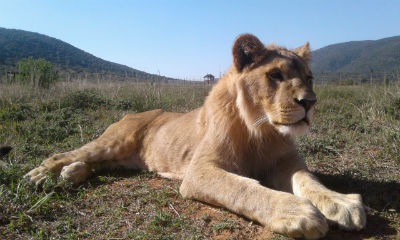