KENYA BANS EXPORT OF SNAKES TO ZOOS AND PET SHOPS

Kenya has reportedly banned the export of several species of snake, including the African rock python, to zoos and pet shops around the world, after research has shown that the ecology of the snakes, especially pythons, has been negatively affected by wildlife trafficking.

Snakes frequently fetch between $100 - $200 each, in a trade destined for zoos and pet shops in the UK, Czech Republic, Germany, the US, Mexico, Brazil and China.

Researchers from the National Museums of Kenya have stated that, as well as having a negative impact on the environment, illegal smuggling is also detrimental to the breeding and feeding patterns of certain species.

It is believed that less than 10 years ago female rock pythons used to produce about 33 young on average, but now females are likely to produce around half that number - likely as result of traders taking larger individuals for trade.

In response to this research, the Kenya Wildlife Service, the authority in charge of wildlife management in Kenya, played a vital role in bringing in the ban, meaning that it is now illegal to export pythons and all licences issued for scientific research and venom extraction abroad have also been suspended. Current anti-poaching laws mean that anyone found guilty of wildlife trafficking, can serve a prison term of up to 20 years.

“The trade in live snakes and many other wild animals for the pet and zoo market is having a devastating impact on many species, adding to the toll inflicted by loss of habitat, persecution and demand for snakeskin and other animal parts. All too often, wild-caught animals are ‘laundered’ into trade through bogus captive-breeding claims. The status of many species, including the African Rock Python, is poorly understood, but if the taking of these animals from the wild is allowed to continue unabated we risk losing species before we even know they are threatened. Born Free fully supports the proactive and precautionary measures reportedly taken by the Kenyan authorities. We also need to clamp down on the exotic pet trade that is affecting so many species, and educate buyers of exotic pets about the unsuitability of these animals for life in captivity and the negative impact their hobby is having on wildlife conservation.” 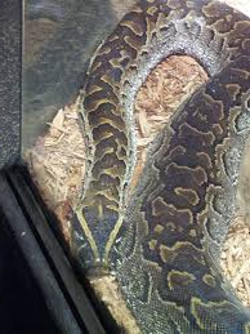