WILL THE UK’S NEW IVORY ACT STOP THE FLOOD OF ONLINE IVORY SALES?

As the long-awaited Ivory Act 2018, banning almost all ivory sales throughout the UK is finally implemented, a Born Free investigation uncovers disturbing evidence that large volumes of ivory are still being sold online, threatening the survival of wild elephants.

READ OUR NEW REPORT: ARE IVORY SELLERS LYING THROUGH THEIR TEETH?

Four years since the UK Government passed the legislation, the Ivory Act 2018 finally comes into force today. By banning the sale of elephant ivory to, from and within the UK, with limited exemptions, it promises to be one of the most rigorous pieces of wildlife conservation legislation in the world.

However, the years of delay have left the door open for the ivory trade in the UK to continue, un-checked, and may have perpetuated demand and also allowed the trade to find new opportunities for the commercial exploitation of elephants, hippo and other ivory-bearing species.

As the Act becomes law, Born Free is releasing its powerful report Are Ivory Sellers Lying Through Their Teeth? to expose the scale and scope of the UK’s online ivory market. The comprehensive study provides an insight into the current volume and value of ivory products advertised on UK auction websites and highlights the magnitude of the challenge facing those responsible for enforcing the Ivory Act.

The investigation is of vital importance, as the deadly trade pivots to find new commercial opportunities and poaching continues to threaten the very survival of all three of the world’s elephant species across much of their range, a threat that is set to continue as long as ivory products are in demand in the UK and across the world.

In its current form, the Ivory Act only prohibits the trade in ivory derived from elephant tusks and teeth. Although elephants are the most common source of ivory, the trade in ivory products from hippos, walruses, whales and dolphins, which is currently not prohibited under the Act, is also widespread.

Will Travers OBE, Born Free’s Co-Founder and Executive President stated; “The struggle to end the bloody ivory trade is not over. Just a few weeks ago, wildlife law enforcement in the Democratic Republic of Congo (DRC) intercepted 2,000 kg of ivory, representing an estimated 150 dead elephants. Via the online trade, could this have been destined, at least in part, for the UK market? And with 68 kg of hippo ivory seized in Uganda in April, the threat to other ivory-bearing species is very real. The take-home message from our report is that all ivory trade, from any species, has to end.”

It can be extremely difficult to accurately identify ivory products from online listings, and even more challenging, due to the limited number of images and poor image quality, to identify which species it comes from. Notably, in the investigation, the species could not be identified for 66.9% of all listings.

As a result, Born Free is calling on the UK Government to extend the ivory ban to include ivory from other species and to ensure the associated penalties are sufficient to deter people from purposely mislabelling ivory products.

Robust implementation of the Act is now vital to ensure any continuing online ivory trade strictly complies with the limited exemptions allowed by the legislation, that any covert listings are identified and removed, and those found to be breaking the law are held to account.

For more than 30 years, Born Free has campaigned fiercely for legal measures to protect elephants from poaching. Therefore, assessing the effectiveness of this long-awaited legislation must be a priority. To this end, Born Free will be monitoring the application of the law and carrying out an extensive follow-up investigation to assess how the implementation of the Ivory Act impacts the scale and scope of the online ivory trade in the UK.

Frankie Osuch, Born Free’s Policy Support Officer and author of the report added; "I know that the ivory trade is a global issue, but I was shocked by how many ivory items I found here in the UK. Assessing ivory demand and value is important as this has been linked to elephant poaching rates, with newly poached ivory often being used to mimic genuine antiques. 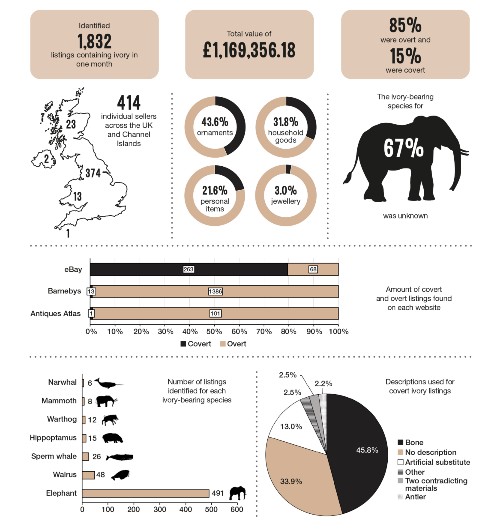 "Assessing ivory demand and value is important as this has been linked to elephant poaching rates, with newly poached ivory often being used to mimic genuine antiques. I hope that the new sanctions associated with the Ivory Act will be enough to encourage compliance among all traders."
~ Frankie Osuch, Born Free’s Policy Support Officer and author of the report 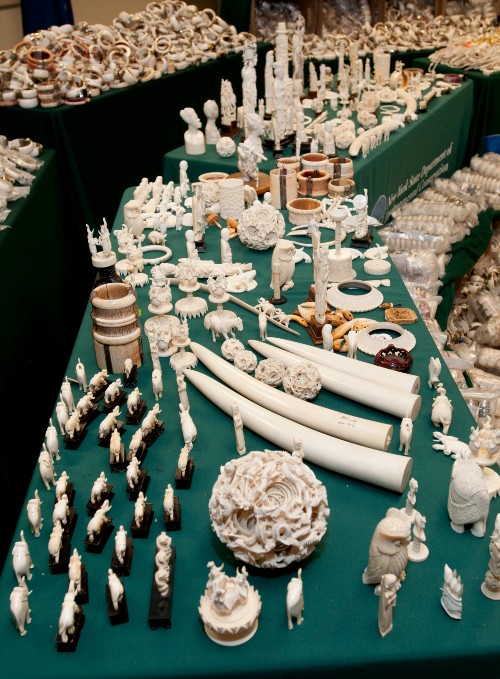 "Companies such as eBay have an anti-ivory policy for very good reasons and to see professional antique dealers blatantly flout this was deeply upsetting and concerning. I hope that the new sanctions associated with the Ivory Act will be enough to encourage compliance among all traders."

Dr Mark Jones, Born Free’s Head of Policy concluded; “The government must now ensure that the system they have introduced to prevent the trade in most elephant ivory under the Ivory Act, and to validate and licence a very limited number of exempt items, is sufficiently robust to ensure only items that genuinely meet the exemption criteria can be traded. Our research demonstrates the sheer scale of online trade in ivory in the UK. While welcoming the implementation of the Act, we remain concerned that resources and measures to police the online trade may not be sufficient to prevent continued covert trade in illegal ivory, which would be disastrous for beleaguered elephant populations. We hope the measures introduced to enforce the Act will allay those concerns.”

READ OUR NEW REPORT: ARE IVORY SELLERS LYING THROUGH THEIR TEETH?