Declaration unveiled by HRH The Duke of Cambridge at Buckingham Palace

International wildlife trafficking threatens the future of many wild animal populations and species, causes untold suffering for millions of individual wild animals, and destabilises economies, social cohesion and security. It also generates multi-billion-dollar profits for criminal syndicates and organisations, and in some cases may fund local militias and terrorist groups. The 11-point plan unveiled by HRH the Duke of Cambridge is therefore a significant step in demonstrably reducing the illegal wildlife trade.

“International wildlife trafficking is a global scourge that is devastating wildlife and robbing local communities of their heritage. Tackling this problem requires a comprehensive and holistic approach involving governments, enforcement authorities, the wildlife protection community and industry.

“Today’s announcement brings key players from the transport industry and enforcement authorities together to implement plans aimed at closing down international transport networks to wildlife traffickers. This is clearly an important and welcome commitment. We look forward to working with the signatories and others to put a stop to wildlife trafficking, and by doing so to secure the future for elephants, rhinos, pangolins and the multitude of species affected by the illegal wildlife trade,”

Interventions by The Royal Foundation and other prominent political and public figures have helped to raise international awareness of the scale of wildlife trafficking, and highlight the challenges faced by wildlife protection agencies and law enforcement authorities. Alongside the efforts of the Born Free Foundation and other non-government organisations and individuals, these have led to a number of international initiatives and commitments aimed at curbing the illegal trade, including the London Declaration on the Illegal Wildlife Trade, and more recently the development of an EU Action Plan Against Wildlife Trafficking which should complement and enhance existing national and regional strategies.

Closing down the transport routes available to wildlife traffickers is an essential component towards achieving these objectives. Engaging those corporations and agencies that control and monitor international transport networks is key. 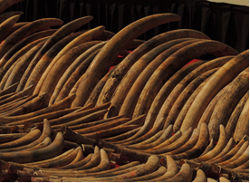