Footage from Bandung Zoo, Indonesia, showing an orangutan smoking has been criticised by the Born Free Foundation and other animal protection authorities. The orangutan, named Odon, is shown smoking a cigarette after a visitor flicked it into his enclosure.

While the Zoo’s spokesperson claims that there is a sign at the enclosure which says visitors are not allowed to give food and cigarettes to the animals, this incident demonstrates how easily a harmful object could be thrown into animals’ enclosures.

There had been calls to shut down Bandung Zoo since last year, following online footage of sun bears appearing to be thin and begging for food from visitors.

This is not the first time that apes have been shown smoking in captivity. In 2012 an orangutan named Tori at the Taru Jurug Zoo in central Java learnt to smoke from picking up cigarette butts from visitors. The zoo had to move her out of reach of visitors to put an end to her habit.

Born Free maintains that such incidents highlight the significant risks posed to the health and safety of wild animals in zoos. Born Free is proud to be working with partners in the Asia for Animals coalition in calling for change to zoos in Indonesia. 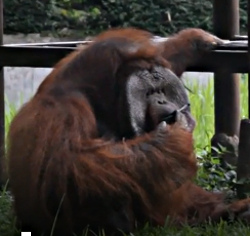