In recent years, there has been an increase in pet owners wanting more exotic and unusual pets, as opposed to the domesticated cat or dog; and now tens of thousands of exotic pets are thought to be kept privately in the UK alone. Unlike truly domesticated species, these are wild animals, with all the same needs and instincts as their counterparts in the wild. Not only is a domestic environment completely unsuitable for such animals, but they may be sold irresponsibly or advertised incorrectly, leading to ill-informed owners being left unsure as to how to provide for their complex needs.

It is little surprise therefore that in recent weeks there has been a spate of reports of abandoned or illegally-kept snakes across the UK:

11th June – Mexican black king snake was found in a house having escaped from a nearby vivarium. Unfortunately, the snake had been attacked and was severely injured.

15th June – A corn snake was discovered in the road in Plaistow. The animal was contained by police, with the outcome unknown.

26th June – A man was left in a coma after being bitten by his ‘pet’ Indian cobra and was found to have 16 venomous snakes at his home in total. All 16 snakes were seized after it was found that none of the snakes were licensed under the Dangerous Wild Animals Act 1976. Unfortunately, one snake had to be euthanized due to ill health.

06th July – A boa constrictor was found by walkers at the Linacre Reservoir and was taken to a nearby vet.

07th July – A Taiwanese beauty snake was found wrapped around a gate in Pensarn.

08th July – 12-foot python was discovered by walkers wrapped around a rock, close to the banks of a river.

09th July – In Lee-on-the-Solent, a man found a corn snake wrapped around the petrol cap of his car

21st July – A woman from Evesham opened her front door and found a Pueblan milk snake. The snake was secured and taken to nearby Vale Wildlife Hospital for safekeeping.

26th July – A 6ft python found in a wooded area near a sports centre in Reading and was taken to a nearby vet.

In 2016 alone, the RSPCA reportedly received nearly 7,000 calls to its cruelty line about reptiles - with 1,689 reptiles collected by officers a 23% increase compared to its previous five years.

Although existing laws in Britain - including the Animal Welfare Act 2006 and the Pet Animals Act 1951 – should offer all pets a certain level of protection, there is confusion over their application and enforcement. The Pet Animals Act 1951, which legislates for the licensing of pet shops, and the Dangerous Wild Animals Act 1976, which legislates the private keeping of dangerous animals, were drafted long before the advent of the internet or the recent growth in popularity of exotic pets and are now widely considered to be unfit for purpose.

Born Free is calling on the UK Government to review the current legislation relating to the sale and keeping of exotic animals. Ultimately, we would like to see restrictions on the sale of exotic pets and bans on the trade and keeping of certain species, including all primates.

Born Free is running Beyond the Bars throughout 2017: our campaign to highlight the plight of wild animals in captivity worldwide. We aim to expose suffering and poor welfare, to increase public awareness, and to call for improvements to legislation covering wild animals in zoos, circuses and kept as pets. . For more information, see www.bornfree.org.uk/beyondthebars. 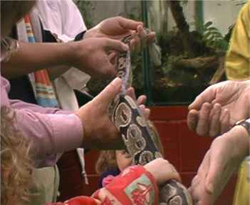