Responding to the news, Born Free’s President and Co-Founder, Will Travers OBE, said: “Hong Kong has long been a massive ivory trade hub, and the main point of entry for both legal and illegal ivory into the lucrative Chinese market. This announcement, coming as it does on the back of China’s closure of its domestic market at the end of 2017, is very welcome, as are the increased penalties for illegal trade in ivory, and the news that ivory traders will not be compensated for the stocks they currently hold. It is an important measure which will help bring additional security to wild elephants which are currently being poached in their tens of thousands a year.”

However, unlike its Chinese neighbour, which has acted swiftly, Hong Kong’s ban won’t come fully into force until 2021.

Travers continued: “We urge Hong Kong’s legislators to implement the ban without delay. Elephants continue to be slaughtered in their tens of thousands every year for their tusks, which are then laundered into legal domestic markets. Delays in the implementation of meaningful bans will only encourage poachers and traffickers to continue their heinous activities while legal markets exist for them to exploit.”

Domestic ivory market closures implemented by the USA, China and many African countries, and announced by Hong Kong, reflect the growing global recognition that all ivory markets must be closed down if the future of elephants across Africa and Asia is to be secured. The international conservation community acknowledged this in a Resolution agreed at the World Conservation Congress in 2016, and soon after the United Nations Convention on International Trade in Endangered Species urged countries in which legal domestic ivory markets still operate to close them down.

Travers concluded: “The UK, and particularly the EU,are falling behind the international trend, and now constitute the world’s largest sources of ‘legal ivory’. Both the European Commission and the UK Government have conducted recent public consultations on the future of their domestic ivory trade. We believe the overwhelming public mood is to achieve a total ban without delay and we urge the UK and EU and act quickly and decisively to introduce comprehensive ivory trade and export bans.”

Born Free works to improve protection for elephants through its field conservation projects across Africa and Asia, and through advocacy at national and international forums. The charity encouraged the Hong Kong Legislative Council to introduce the announced ban, and is actively lobbying the UK Government and European Commission to follow suit. 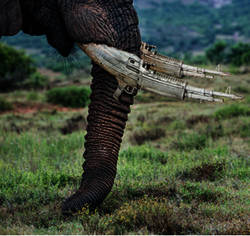