Fears for future of the species as Tanzania prepares to auction 12,500 hippo teeth

Born Free, is deeply concerned to learn that the Tanzania government is to hold an auction of 12,500 hippo teeth weighing 3.5 tonnes on Monday 29th January 2018, raising fears for the future of the species across key areas of its range.

The hippo is classified as ‘vulnerable’ by the IUCN Red List of Threatened Species. There are an estimated 115,000 – 130,000 hippos across 29 countries (the African elephant, the focus of so much international attention and concern, numbers over 400,000), with numbers declining in recent years due to habitat loss and hunting for their meat and teeth. A 2001 census suggested there were 20,000 hippo in Tanzania at the time, but it is likely that numbers have fallen since then – a concern supported by the fact that Tanzania suspended permits for the export of hippo teeth in 2004.

Reacting to the news, Born Free Foundation President and Co-Founder, Will Travers OBE, said: “As the world moves towards tackling elephant poaching and the illegal global ivory trade by closing domestic ivory markets, we must ensure that other ivory-bearing species such as hippo are afforded effective protection. We are urging Michael Gove to introduce a total ban on all ivory sales and to prohibit the import and export of ivory to and from the UK. We further urge the UK government and the international community to support measures to conserve all ivory-bearing species that are increasingly impacted by the wildlife trade, without delay. Saving elephants but losing hippos is not an option – not on our watch.” 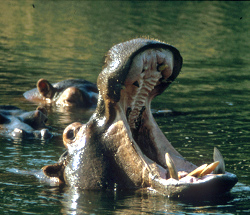