Horrifying footage has emerged of a crocodile biting an animal trainer's head at a zoo in Thailand.

The video, filmed on Sunday 11th June, shows a man performing in a crocodile show on the island of Ko Samui in Thailand.

During the routine, the man can clearly be seen waving a stick around the crocodile’s mouth before putting his entire head inside; at which point the crocodile suddenly clamps its jaws down and thrashes around.

A spokesperson for the Born Free Foundation said:

“We are convinced that, while direct contact between dangerous wild animals and humans continues in captivity, incidents such as these are inevitable; crocodiles are wild, unpredictable animals who can - and do - inflict fatal injuries on people. It is time that idiotic shows such as these are ended, for the sake of animals and people.” 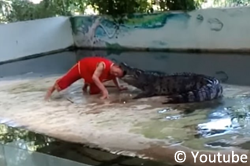