News reports indicate that three male gorillas escaped from their enclosure at Paignton Zoo, Devon, on Friday 30th June. Attempts to tranquilise all of the gorillas were reportedly unsuccessful, and it took until the next day for the gorillas to be returned to their enclosure. The gorillas were from a bachelor group at the zoo, and apparently escaped into a secure service area, where they caused significant damage to water pipes, wiring and ducts.

Chris Draper, Head of Animal Welfare and Care for Born Free said: “Not only is it very concerning that the gorillas escaped in the first place, but they escaped into an area that, while apparently securely separated from public areas, was by no means safe for the animals. The circumstances surrounding this escape need to be established and made public, and action should be taken as a priority to prevent such an incident from reoccurring.

Furthermore, we should ask why this zoo is keeping a bachelor group of gorillas in the first place. In the wild, Western lowland gorillas most often live in groups of one silverback male, multiple females, and their offspring. While they sometimes live in the wild in groups without breeding females, bachelor groups of gorillas seem to be predominantly a feature of zoos. Sadly, it seems clear that captivity cannot match the natural social requirements of these highly intelligent and sensitive animals.” 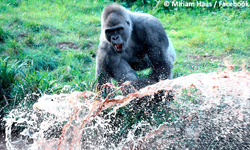