EASTERN LOWLAND GORILLAS ON THE BRINK OF EXTINCTION

On Sunday 4th September, the International Union for the Conservation of Nature (IUCN) announced that it had placed the Eastern Lowland Gorilla in its ‘Critically Endangered’ Red List category, meaning that the species faces an extremely high risk of extinction in the wild. This is the highest category of risk. The next category is ‘Extinct’.

Ian Redmond OBE, world-renowned gorilla expert and Born Free Foundation Wildlife Consultant, said: “It is shocking that the world’s largest and most powerful primate has been reduced to this, but this change in IUCN Red List status is actually long overdue. For years our courageous Congolese colleagues have been attempting to collect the data to confirm what many suspected – poaching of this spectacular species is out of control. Now is the time for a concerted international response to bring security to both people and wildlife in this part of the DRC.”

Eastern Lowland Gorillas (Gorilla beringei graueri) which live only in the remote forests of eastern Democratic Republic of Congo, have now joined the Mountain Gorilla and their Western cousins in the ‘Critically Endangered’ category, along with both species of orangutan, leaving only two of the planet’s remaining great ape species (chimpanzees and bonobos) in the slightly lesser ‘Endangered’ category.

The reassessment of Eastern Lowland Gorillas largely reflects a devastating decline in the lowland-dwelling Grauer’s subspecies, which have been reduced from around 17,000 to about 3,800 over the past 20 years, a reduction of 77% in one generation. The main causes of decline are illegal hunting for bushmeat for local consumption and commercial trade in both meat and live infants. The situation is exacerbated by conflict and the presence of large numbers of armed insurgents in the region which puts the lives of rangers and wildlife law enforcement agents at risk and prevents effective protection across the gorilla’s range. Rebel groups terrorise villagers and fight to control lucrative mines that supply tantalum and tin to the global electronics industry. This means that everyone with a mobile phone, laptop or games console is likely to have unwittingly paid hunters to kill gorillas, forest elephants and other animals to feed the miners and militias.

Since 2001, the Born Free Foundation has been supporting the brave wardens and rangers of Kahuzi-Biega National Park, and helping the award-winning local conservation organisation, the Polé-Polé Foundation, win the hearts and minds of the local community.

Although only around 880 of the Mountain subspecies remain, they have been faring somewhat better, with populations thought to be increasing slowly, but nowhere near enough to compensate for the drastic losses among the Eastern lowland population .

“Without drastic and decisive action, we are in real danger of losing our closest cousins, and the largest remaining great apes. This isn’t just a conservation disaster; it also means unimaginable suffering has been inflicted on individual gorillas and their families. It is vital we do everything we can to prevent further losses among these gentle, highly intelligent and family-oriented animals, not only for their own sake, but for the sake of the forests which they are so influential in shaping and maintaining.”

"It is time for the United Nations, in partnership with the Range States, to intervene to bring stability and security to the area and for conservation agencies to support effective and long-lasting conservation programmes to support local communities, to ensure the survival of the species and its habitat. Killing of these animals for bushmeat, the trade in their young as pets, and the systematic destruction of their habitats, must be addressed as a matter of the utmost urgency.” 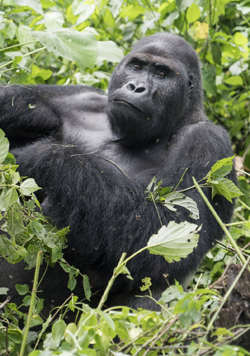