The Born Free Foundation is shocked by the news from Cincinnati Zoo, which indicates that a child climbed or fell into the gorilla enclosure, and zoo authorities subsequently shot dead a male gorilla named Harambe.

Media reports indicate that Harambe was not attacking the child. These reports are supported by brief video footage seen by the Born Free Foundation which shows Harambe standing over the child and gently investigating him. Whatever emergency systems were in place were ineffective in ensuring that Harambe could be separated from the child, and the zoo management decided to shoot the gorilla. Initial reports indicate that the zoo decided against using sedation or anaesthesia on the basis that it would take time to render the animal unconscious, and the risk to the child might be increased.

“We are pleased that the child is safe. Nevertheless this is a tragedy: for Harambe, who has had his life cut short, and for the remaining gorillas at the zoo who have lost a key member of their family. And moreover, this was an entirely avoidable tragedy. It should never have been possible for a child to climb or fall into the gorilla enclosure.”

Ian Redmond OBE, a founder of the UNEP Great Apes Survival Project and advisor to the Born Free Foundation said:

“My immediate response to the killing of Harambe, the Cincinnati Zoo gorilla, is a deep sense of regret. Watching the shaky mobile phone video, it is clear that the child was understandably frightened and the gorilla understandably stressed, but in the video shown on the BBC News website, Harambe did not attack the child.   He pulled the child through the water of the moat, held his hand - apparently gently, stood him up and examined his clothing… but the video does not show the whole incident so I am not in a position to make a definitive judgement.   I can imagine the panic of the child’s mother and the fear of the zoo staff. For a man with a gun thinking a child is in danger, it is a tough decision but there were other possible outcomes. In two other incidents where children have fallen into zoo gorilla enclosures in Jersey and Chicago, neither the gorillas nor the children died.”

“Aside from the ethical issues of keeping apes in captivity, the key question is:  how is it possible – yet again - for a child to gain access to any zoo enclosure?  Especially when zoos are primarily a family attraction?”.

The Born Free Foundation is urgently calling on the Association of Zoos and Aquariums (AZA) to review visitor safety and emergency protocols across its member zoos, and on the US Department of Agriculture to launch a full investigation of the incident. 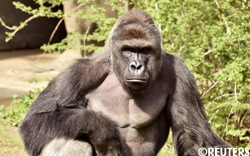