“Listing all pangolin species under the ESA will be a dramatic and positive step in saving the species from extinction.” Born Free USA CEO Adam M. Roberts

Washington, D.C. (March 15, 2016) – Responding to a scientific petition by conservation groups, the U.S. Fish and Wildlife Service today said Endangered Species Act protections may be warranted for seven species of pangolin, one of the most sought-after and poached wild animals in the world.  With more than 1,100,000 pangolins estimated to have been trafficked globally from 2006 through 2015, Born Free USA, the Center for Biological Diversity, Humane Society International (HSI), The Humane Society of the United States (HSUS) and the International Fund for Animal Welfare (IFAW) petitioned to protect the species in July 2015.

Following today’s preliminary positive finding on the petition, the U.S. Fish & Wildlife Service will now invite information from scientists and the public about the pangolins’ status and threats to determine whether an Endangered listing would be appropriate.

“This is an important first step in the fight to protect pangolins,” said Jeff Flocken, North American Regional Director for the International Fund for Animal Welfare (IFAW). “Pangolins have been silently killed and trafficked for far too long. It’s time to recognize the grave situation threatening the survival of the species and offer them the protections they rightfully deserve.”

Small and scaly, these armored creatures once inhabited vast portions of Asia and Africa. Their populations are severely dwindling due to a massive and growing demand for their meat and scales, which are believed by some practitioners of East Asian medicine to have curative properties. Most illegally sourced pangolins are destined for markets in China and Vietnam, but demand for pangolins in the United States remains significant. Nearly 30,000 imports of pangolin products were seized in the United States between 2005 and 2014.

“The U.S. is a destination for parts and products of poached pangolins,” said Teresa M. Telecky, Ph.D., director of the wildlife department at Humane Society International. “In 2014, authorities seized more than 11 kilograms of traditional Asian medicines containing pangolin, and seized an additional 460 individual medicine containers that also had pangolin parts. Our research shows that these products are sold here in the U.S. both online and in stores. Listing all pangolin species as Endangered will end the role of the United States in this harmful trade.”

If the government moves forward with heightened protections under the Endangered Species Act, the import and interstate sale of all pangolins and pangolin parts would be prohibited in the United States, unless such activity can be shown to promote the conservation of the species.

“The Endangered Species Act is among the strongest conservation laws in the world, and listing all pangolin species under the Act will be a dramatic and positive step in saving the species from extinction, one that the U.S. Fish and Wildlife Service is uniquely positioned to provide. We congratulate the Service in taking this important initial step,” said Adam M. Roberts, CEO of Born Free USA and the Born Free Foundation.

Currently, only one of the eight pangolin species — the Temminck’s ground pangolin from Africa — is protected as Endangered under the Endangered Species Act. Because all species of pangolins so closely resemble each other that law enforcement officials have difficulty distinguishing them, the groups also filed a “similarity of appearance” petition, which, according to today’s announcement, will be factored into the listing determination for the seven currently unprotected species.

“Pangolins are such amazing and odd creatures — like little tanks with tails,” said Sarah Uhlemann, international program director at the Center for Biological Diversity. “But if we don’t act now to protect them, these extraordinary animals will disappear from the planet forever.” 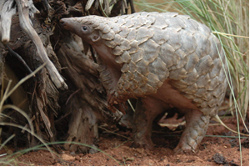