Born Free has today welcomed the findings of new genetic analysis published in the journal Current Biology that has unexpectedly found giraffes are not one species, but four.

“The findings of this study come at a relevant time when the status of giraffe is being reassessed by the IUCN* Red List. The recognition of four separate species will enable a better understanding of their conservation status, and ensure that conservation attention is well placed to protect giraffe diversity.”

Over the last two years, Born Free has been supporting the Giraffe Conservation Foundation to conserve a subspecies of the Northern giraffe, the West African giraffe. Once widespread across West Africa, by the 1990s its numbers had dropped to one population and an estimated 50 individuals in Niger, as a result of hunting and habitat loss. As a result of conservation attention targeting the local communities that live alongside these animals and the support of the government of Niger, numbers have since increased to several hundred. Last year, Born Free supported the completion of an Action Plan for this giraffe and this year Born Free has supported the implementation of a West Africa giraffe census, which is currently underway. Once their population size is accurately known, then further conservation measures can be implemented to protect this giraffe in the long-term. 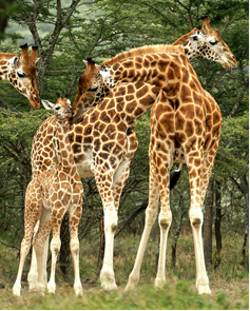