The Born Free-supported Freeland has assisted authorities in Thailand with the arrest of a gang of tiger poachers following a three-month investigation.

Freeland assisted the authorities after a fresh tiger skeleton was found inside baggage of two Vietnamese nationals. Using Freeland’s forensic experts, evidence was found that the poachers, had crossed from Laos into Thailand to poach tigers. The poachers documented their trips on their phones, including photos of tiger kills.

Tigers are classified as Endangered by the International Union for Conservation of Nature and trade in the species is prohibited under the Convention on International Trade in Endangered Species. Demand stemming predominantly from east Asia is driving the illegal trade of tigers. It is likely that the tiger skeleton would have been used to make tiger bone wine, which is promoted as a ‘traditional’ treatment for arthritis and impotence.

Petcharat Sangchai, Director of Freeland-Thailand, said: “We do not think this was the poachers’ first time in Thailand, and we have reason to believe they were planning to strike again.” 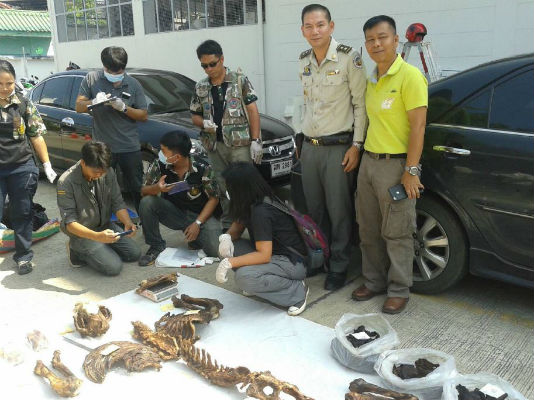 Dr Liz Greengrass, Born Free’s Head of Conservation, added: “As few as 200 tigers remain in Thailand and therefore it is crucial that poaching syndicates are intercepted. The work of Thai authorities and Freeland in stopping these gangs is vital to the survival of tiger populations.”