Thirteen monkeys have reportedly died in a fire at Woburn Safari Park.

Fire crews were called in the early hours of this morning but sadly none of the animals could be saved. An investigation into the cause of the blaze is now underway, during which time the park will remain open to the public. This horrific news comes just over a week after a fire at London Zoo, which killed an aardvark and left four meerkats presumed dead.

Born Free’s Head of Animal Welfare & Captivity, Chris Draper, said: “Fires and animal deaths at both London Zoo and Woburn Safari Park leave us with even greater concerns regarding the ability of zoos to guarantee the safety of staff, visitors and animals. We hope that a detailed formal inquiry will be undertaken to ensure that such tragic and upsetting events cannot happen again at these or other zoos, and that the system for licensing and inspection of zoos will be reviewed to minimise the risks of such incidents in the future.’’ 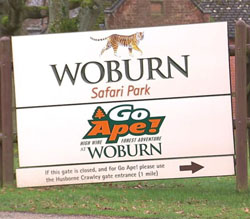