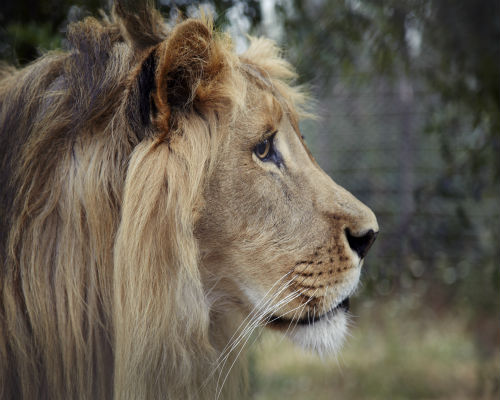 We are heartbroken to report that our very special lion Dolo has passed away at the age of 15, following a short illness.

Dolo was the first rescued lion to arrive at Ensessa Kotteh in Ethiopia, where he had lived happily since 2007.

Before being taken into our care with the assistance of the Ethiopian Wildlife Conservation Authority, Dolo was kept on a one-metre chain in a wooden shack in Southern Ethiopia. For four years, the chain was so restrictive that it rubbed off his mane, and the lack of sunlight and poor nutrition led to permanent damage to his eyesight.

However, it wasn’t long before he came out of his shell at Ensessa Kotteh. He loved to snooze in the warm sunshine and enjoyed joining the other lions for a roaring chorus each morning.

Dolo’s instantly recognisable face led to him being featured in numerous Born Free photographic campaigns and he was loved by the Born Free team and his adopters alike.

Virginia McKenna OBE, Born Free's Co-Founder & Trustee, said: "Animals in trouble always touch our hearts as I’m sure you agree. Sometimes one can mean something extra special – and that is why I felt so very sad when I was told of Dolo’s death. The four years spent in a shed on a one metre chain do not bear thinking about. But the caring and wonderful years that followed at Ensessa Kotteh will always be remembered. Valued, respected, loved until the end."