Two people from Stoke-on-Trent have admitted animal welfare charges after the extent of cruelty inflicted on 23 animals in their care came to light.

The animals, which included a fox, raccoon dog, barn owl, bearded dragon, African grey parrot, snakes, degus, two dogs and a cat, were discovered by chance by a meter reader who alerted the RSPCA. When officers entered the home, they found piles of faeces in the kitchen, rotting chickens in a snake tank and animals covered in fleas. Sadly, one dog was in such a bad state she had to be put down. The rest of the animals are in the process of being rehomed.

The owners were charged with animal cruelty and offences under the Animal Welfare Act. Both have been disqualified from keeping animals for three years.

Dr Chris Draper, Head of Welfare & Captivity at Born Free said: “It is heartbreaking to consider the suffering these animals experienced. Many of the animals were exotic ‘pets’ – wild animals with complex needs and specialised requirements, yet all too easily acquired from pet shops and online traders. We are very concerned at the lack of regulation relating to the sale and keeping of these animals. While we hope this is an isolated incident, many more wild animals are languishing in homes and pet shops across the country.” 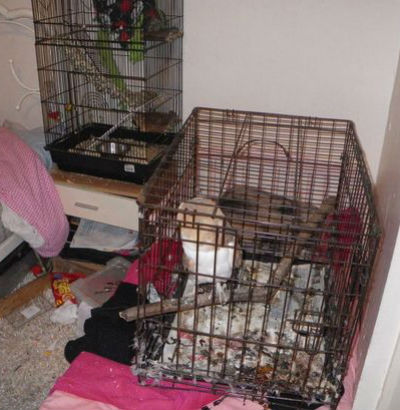 Born Free is calling for a review of the sale and keeping of all exotic pets in the UK, and is petitioning the government for a review of the law regulating the private keeping of wild animals listed under the Dangerous Wild Animals Act 1976. This petition closes in just over two weeks. Please sign and help us reach our target of 10,000 signatures.