On the 4th February, Esmond Bradley Martin, a leading investigator into wildlife trade, was found dead at his house in Nairobi by his wife, Chrysee, at round 4 pm.  The police believe that his death was the result of a burglary gone wrong.  Others speculate that he may have been murdered either because of the investigations he had just carried out into the ivory trade in Myanmar or because he was resisting the possible illegal construction of a new church on land in the area where he lived.

Our thoughts and deepest sympathies are with his wife Chrysee, Lucy Vigne his co-investigator, his family, and his friends and colleagues from the world of conservation.

I cannot actually remember the first time I met Esmond.  He has always been a fixture in my professional life but it was probably at the CITES Conference in Lausanne in 1989.  At the time, Esmond was one of the pre-eminent researchers into the trade in rhino horn and he was appointed a United Nations Special Envoy for the species.  His relentless travels to markets for rhino horn in the Middle and Far East brought about profound change, in particular an end of the use of rhino horn to make ceremonial dagger handles in Yemen.

But it was for his in-depth research over decades into the ivory trade and, especially the ivory markets of Africa and the Far East, for which is he is most celebrated.  His various detailed reports, produced in partnership with  Lucy, provided essential information on which international decisions were based.  It was Esmond who exposed some of the key trafficking routes.  It was Esmond who contemplated the role of mammoth ivory in maintaining the viability of ivory  markets.  It was Esmond who was able to show that, as global efforts to kill the trade began to bite, the number of ivory items on sale started to decline.

As a person he was one of the most charming gentlemen you could ever have the good fortune to meet.  Always polite, always principled and always quietly passionate about wildlife.

It is almost impossible to imagine that he will not be at the next CITES meeting in 2019. But, of course, while he will not be there in person, his spirit will surely attend. 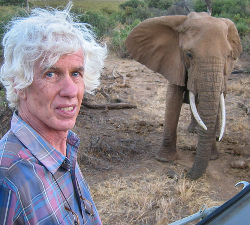