Born Free is saddened to hear of the premature death of yet another elephant in a zoo: 13-year-old Gajaba at Seoul Grand Park, in South Korea.

Gajaba, a male elephant born in Sri Lanka but sent to the South Korean zoo from the notorious Pinnewala Elephant ‘Orphanage’ as a five year old, apparently collapsed and died on 5th August.

The cause of death is yet to be determined, and may never be identified, but there is evidence that elephants die in captivity at a much younger age than is the case with their wild counterparts. Conversely, successful breeding and long term survival of young elephants in zoos is uncommon, and the zoo industry needs a continuous external supply of elephants to bolster failing captive populations. For example, South Korea has acquired at least 27 elephants for its zoos since 2000, sourced from elephant range countries such as Myanmar, Nepal, South Africa, Sri Lanka, Cambodia, Tanzania and Thailand.

These transfers continue, despite the increasingly widespread view that the practice is unethical, and in disregard of a growing body of evidence illustrating that captive environments fail to meet elephants’ complex psychological and physical needs.

A 14-year-old elephant, also transferred from Sri Lanka, and a young elephant reportedly sired by Gajaba, remain at the Seoul Grand Park.

Born Free urges the authorities in South Korea to look again at their practice of importing elephants for exhibition in zoos; and the Sri Lankan Government to end the practice of placing elephants in overseas zoos. 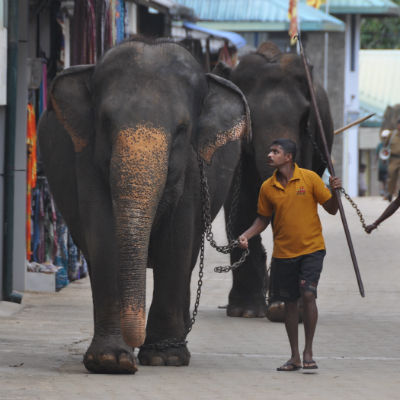