It has emerged today that Asian elephant Tonzi at Twycross zoo has been put to sleep after suffering from severe arthritis. Tonzi was only 32 years old.

The news comes four years after she was filmed on CCTV being beaten by her keepers at the zoo.

The Born Free Foundation feels that Tonzi’s life and death serve as stark reminders of the sad reality of life in captivity for elephants. Captive elephants are often plagued by a host of physical and psychological ailments that are simply not found in their wild counterparts. Inadequate enclosures with limited space or environmental complexity are detrimental to the health and welfare of captive elephants, with obesity and arthritis among a host of problems seen all too frequently in captive elephants.

Despite the reports of the brutal beating of Tonzi, four zoos in the UK still permit elephants and keepers to share the same space and for keepers to use an ankus (or bullhook) to control the elephants; a practice that Born Free and colleagues have condemned as anachronistic and unsafe.

"Tonzi’s death should not be considered to be related to old age: thirty two is not old for an elephant. Tonzi had been kept at Twycross Zoo since 1991, so it seems likely that her life at the zoo contributed to her developing arthritis, and it is already known that elephants in zoos die younger than those in more natural habitats. It seems abundantly clear that zoos cannot fully meet the needs of such complex and intelligent animals – especially when we still permit the use of bullhooks in their management - and in my opinion, we need to move towards a humane and strategic phase out of elephant keeping in the UK.”. 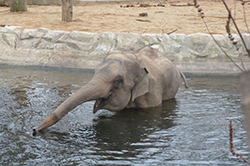