Many agree that the most immediate critical threat to African elephants, rhinos, apes and other endangered wildlife is large-scale poaching and the organized criminal networks which traffic in these animals. Although national laws and international treaties protect these species throughout their range, generally there is weak application of relevant laws to arrest wildlife criminals and criminal courts to hand down sentences which not only take significant wildlife traffickers out of action but which also act as a deterrent. Widespread corruption feeds this process.

Enter EAGLE (Eco Activists for Governance and Law Enforcement), a network of projects addressing this very need. Kicking this off in Cameroon in 2003, Founder Ofir Drori recognised that a different approach to an old problem was sorely needed, and trialled a new approach to wildlife trafficking. When this project (LAGA, the Last Great Ape Organisation) was initiated, the national wildlife law had never been used in a court of law.

Fast forward 14 years and there are now 8 other countries applying the same model developed in Cameroon, involving a rigorous system of field investigations, operations performed in conjunction with government authorities which seize contraband and arrest key culprits, legal support for government prosecutors to enable effective and deterrent prosecutions and media outreach to improve public perception of the risks involved in illegal wildlife trade.

Big news came three days ago, on 17th January 2017. Shaping up to be a good day for EAGLE by any account, 3 traffickers had been arrested and 12kg of ivory seized in Congo, another ivory trafficker was arrested in Gabon and 3 more ivory traffickers arrested with 27kg in Uganda. Suddenly, the news echoed through social media – 5 tonnes of pangolin scales, the largest ever seizure of its kind in central Africa – had just happened in Cameroon. Two Chinese nationals were arrested and another one was on the run.

Across Africa, thanks to EAGLE, significant illegal traders are arrested each week. In December 2016 alone, 21 traffickers in 5 countries were arrested, 13 of which were found to be trading in ivory. Four others were airport government officials coordinating their trafficking activities from Cameroon’s capital city airport.  One of these was caught while facilitating the export of 680kg of pangolin scales between Cameroon and Malaysia via an Ethiopian Airlines flight using false documentation. The case is ongoing, and LAGA is assisting the airport anti-trafficking unit and the police in their investigations. More on EAGLE’s December 2016 activities here.

EAGLE aims for the more high value targets, those positioned at higher levels within trafficking networks. This enables the disruption of networks through the supplanting of these key positions of trust, and through the access they provide to valuable information about the networks. For example, details regarding the cross border connections between traders are vital in amplifying the impacts of an arrest.

Any seizure of wildlife is good news. It means that enforcement authorities are doing their work, that traffickers’ profits are undercut, that the wildlife concerned doesn’t enter the trade chain to satisfy and stimulate demand further, and any follow on actions can have a multiplying effect. But we mustn’t let ourselves become immune to what the figures represent: when we talk of ‘5 tonnes of pangolin scales’ or ‘27kg of ivory’, behind those numbers are individuals whose lives have been cut short, often in brutal ways, and are no longer supporting and enabling their species and the wider ecosystem to function in a healthy way.

So while we should rejoice in EAGLE’s successes, take solace in the continuing work of these committed individuals, and continue to support them, let’s also take a moment to consider the individuals lost to this brutal trade, renew our own commitment to protect wildlife in the wild, and do all we can to prevent these kinds of losses from happening again. 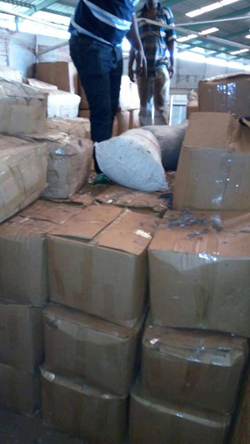