Earlier this week, at the world-renowned Tusk Conservation Awards, held at the Victoria and Albert Museum in London, HRH The Duke of Cambridge presented John Kahekwa, founder of the Pole Pole Foundation International (POPOF), with the highly-prestigious Prince William Award for Conservation in Africa. This lifetime achievement award recognises outstanding dedication and exceptional contribution to conservation in Africa.

A Congolese naturalist, John has dedicated his working life to protecting the eastern lowland gorilla in the Democratic Republic of Congo, recently declared ‘Critically Endangered’ by the International Union for the Conservation of Nature (IUCN).

Born Free has supported gorilla conservation efforts in and around Kahuzi Biega National Park since 2000 through the donation of high priority equipment and vehicles as well as funding essential monitoring efforts undertaken by the gorilla rangers. John’s work has been assisted specifically through funding for Anga Primary School, Miti, as part of  our Global Friends Programme, which has enabled  the construction of school buildings, the development of  its environment club and the employment of local teachers. Winning this well-deserved accolade is due recognition for a project that has developed into a world-class community-based conservation approach.

On receiving the Award, John, said: "I have worked hard for more than 20 years so it is amazing to be recognised by Tusk with this prestigious award. I feel great pride for the Pole Pole Foundation, for the gorillas, for the communities, and for my country, the DR Congo."

Conservationist and the Kahuzi Biega’s chief gorilla tracker between 1983 and 2003, John was born in 1963 in Miti village near the Park headquarters. Since founding POPOF, John has been nominated for two further international conservation awards, the Marjan Marsh Award in 2012 for ‘an outstanding conservationist working in a region of armed conflict’ and a coveted Whitley Award in 2013.

World-renowned conservationist and Born Free’s Wildlife Consultant, Ian Redmond OBE, said: “In terms of dedication to conservation through thick and thin, John Kahekwa is an inspiration. I have known him as a friend, colleague and fellow gorillaphile since 1983. While John has endured civil wars, refugee crises, attacks by armed militias and devastating poaching, he has also created a successful grassroots organisation, built a successful school, one classroom at a time, planted some four million trees and helped communities around Kahuzi-Biega out of poverty. On a personal note, he guided my sons on their first gorilla safari. We have watched our kids grow up, visited each other’s homes and forged a lifelong friendship. I am thrilled his courage and sheer determination is being recognised in this way.”

POPOF reduces human pressure on Kahuzi Biega National Park by improving relations with the local community, offering employment and training to former poachers, and providing development support to schools and small businesses. Since its establishment in 1975, the Park and its inhabitants have faced many threats including habitat destruction, poaching and mining - the latter fueled by the global demand for coltan, used in the production of products such as mobile phones, laptop computers and consoles.

Kahuzi-Biega National Park is a UNESCO World Heritage site in the South Kivu Province of eastern Democratic Republic of Congo. The Park encompasses two prominent mountains, Kahuzi and Biega, and is one of the most ecologically important sites in the Albertine Rift, a biodiverse region containing many threatened and endemic species. 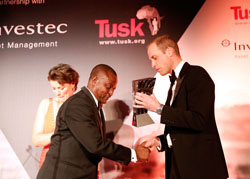