Following the recent prohibition by the Vancouver Park Board on the breeding and performance of captive cetaceans (whales, dolphins and porpoises) at the Vancouver Aquarium, the Supreme Court in British Columbia has overturned the ban on the grounds that the Park Board has no jurisdiction to impose restrictions on the day-to-day running of the aquarium.

Nonetheless, the Aquarium has already given indications of apparent changes to their practices; although it appears that they intend to build a new show tank for the display of 'rescued' dolphins within their tourist site at Stanley Park. This would mean that 'rescued' cetaceans would be displayed to paying tourists.

Several local and international NGOs are now urging the Park Board to completely ban the import of cetaceans into Vancouver Aquarium, regardless of whether it is deemed a 'rescue' animal. Born Free is in full support of a ban on the import of cetaceans into the Aquarium in order to end the keeping and display of whales and dolphins, once and for all. 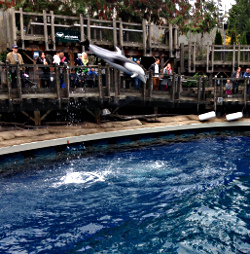