On the 2nd February, UK Government department Defra released its plans for new regulations relating to the licensing of animal establishments such as boarding kennels, horse-riding schools and pet shops.

The report follows a public consultation carried out in late 2015 which sought views on the current law surrounding animal licensing in England and Wales and how it might be improved. Central to Born Free’s response to the consultation were concerns over the lack of protection currently afforded to wild animals sold as pets. These concerns were echoed by various other leading animal protection groups. It was therefore disappointing to learn that the Government has no plans to address the burgeoning exotic pet industry as part of the licensing legislation overhaul.

Like many other organisations working to protect animal welfare and prevent expansion in the trade in wild animals kept as pets, Born Free has repeatedly highlighted the fact that wild animals are inherently unsuitable to be kept as companion animals and that, to date, the Government has never reviewed the welfare implications of this trade. Born Free and other organisations requested that this issue be taken seriously and addressed as part of the review.

In its initial summary of responses, published in September 2016, the Government recognised that, on the subject of wild animals being sold as pets, “there was a strong emphasis on the need for increased regulation” and that “one of the other main suggestions was the drafting of a positive list of animals that it is legal to keep, with all other animals not on the list being prohibited”. Despite this explicit recognition of concerns raised, no concrete steps to review, much less address, the welfare concerns for exotic animals were outlined in last week’s report.

Indeed, despite serious concerns over wild animal welfare being raised by multiple expert organisations, the Government has merely suggested that “that pet shops could ask prospective buyers what they know about the animal they are trying to purchase, to make sure they are fully aware of the needs of the animal” and that guidance on exotic animals sold as pets would be provided to local authority inspectors.

“The serious welfare concerns surrounding the sale of wild animals as pets will not be addressed by conversations between pet shop owners and buyers, nor will guidance for local authorities change the fundamental fact that wild animals are simply not suited to being kept as pets. The Government had an opportunity to take steps to make meaningful change to our animal welfare legislation which would protect animals from harm but, instead, appears to be brushing the issue under the carpet. We are calling on the Government to, at the very least, recognise that the regulation of sale and keeping of exotic animals requires a full review on its own merits and commit to carrying out that review in the current Parliamentary term”.

The Government now plans to begin drafting secondary legislation to update existing rules surrounding animal licensing. The Born Free Foundation will follow progress of this process carefully and update supporters on important development in due course. 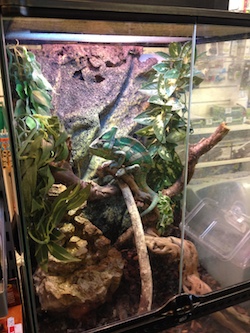