Representatives from 16 leading European animal protection groups, including the Born Free Foundation, Eurogroup for Animals and Animal Advocacy and Protection (AAP), recently concluded meetings in Brussels, Belgium to launch a Europe-wide collaboration to end to the use of wild animals in performance. The coalition is advocating an end to the use of animals such as elephants, big cats and primates in entertainment including circuses and other live performances, television and film.

Liz Tyson, spokesperson for the Born Free Foundation’s ‘Animals in Entertainment’ campaign, specifically said: “The use of wild animals in performance, whether in a circus or during the production of a television programme, advertisement or feature film, inevitably impacts negatively upon that animal’s welfare. Removed from their parents at a young age and being kept in temporary and then necessarily rudimentary and limited accommodation, animals such as elephants, monkeys and big cats are denied the ability to meet some of their most basic physical, social and psychological needs”.

Raquel Garcia, spokesperson for AAP said, “In addition to concerns about animal suffering, the use of wild animals in performance has other negative implications; such as the impact on wild populations due to the (illegal) capture of animals, risks to public health and the health of other animals and to demean the natural attributes of animals, which are often required to perform behaviours far removed from the natural behaviour of wild counterparts.”

According to the Federation of Veterinarians of Europe (FVE), representing over 230 000 veterinarians throughout Europe, the use of wild animals in travelling circuses must be prohibited. “It’s simply impossible to adequately meet the physiological, mental and social needs of the animals in travelling circuses,” stated Jan Vaarten, Director of the FVE.  “There are no good reasons to justify the prolongation of such practices.”

While some countries in the EU have implemented restrictions on the use of animals in circuses, with 6 countries having already banned the use of wild animals in such shows, the two day workshop sought to look beyond the big top and include other, lesser-known, practices in their considerations.

Daniel Turner, spokesperson of the Born Free Foundation and the ENDCAP coalition on EU policy said, “While recognising that there is still much to be done to bring an end to the use of wild animals in circuses across many EU countries, the general public are increasingly aware of the animal suffering that can, and does occur in these operations. Through this collaborative approach, efforts will concentrate on achieving expedite bans in the remaining countries where this practice is still legal. Wild animal performances have “no place in modern European society”.

The groups have committed to a series of joint strategies and coordinate actions in a move which will see information and skills sharing between the involved groups. Turner concluded, “Our joint efforts will ensure that our combined long-term experience is used to absolute best effect for the animals”. 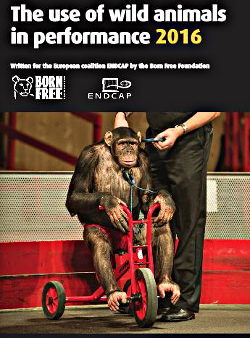