Counting elephants and other large mammals like buffalo, reticulated giraffe and Grevy’s zebra over a 65,000km2 – half the size of England - is a gargantuan task. It takes time, funds, sweat and various technical experts to achieve results.

This is currently the situation unfolding in the greater northern Kenya where the Kenya Wildlife Service (KWS), Born Free Foundation, government agencies and other NGOs are conducting an aerial census for these large mammals. The 11-day exercise that includes training of the participants will cover the whole of Laikipia and Samburu counties and parts of Marsabit, Isiolo and Meru counties.

Human activities will also be monitored such as farming, logging, settlements, livestock bomas, water points amongst others. The last aerial count in this ecosystem excluding Meru and Isiolo was conducted in 2012 and netted 6,454 elephants, arguably hosting the second largest population in the country after Tsavo.

Conducting any census - human or wildlife - is hectic. It involves numerous planning meetings and lots of logistical arrangements before even getting to the actual activity. More than 70 participants for the ongoing census have been drawn from multidisciplinary areas – front and rear seat observers, research assistants, GIS staff, pilots amongst others - and are sited at two operational bases. 14 fixed winged aircraft will be used in the exercise. The expanse survey area is divided into 108 blocks, each measuring about 600km2. Born Free Foundation has provided 7,600 litres of aviation fuel and research scientists for the exercise.

Born Free’s support for Meru and the larger ecosystem spans for decades and establishing the wildlife populations will assist us and all conservation stakeholders in safeguarding the wildlife. Since 2015, Born Free Foundation has been undertaking a partnership project in Meru Park with the KWS on law enforcement and anti-poaching efforts, lion monitoring, community outreach and education. 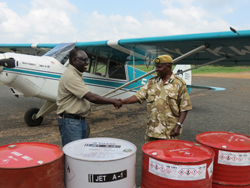 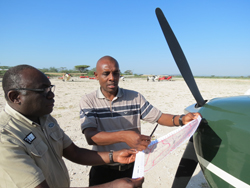 For years, aerial censuses which are appropriate for large mammals have been conducted in Meru every three years. Conducting wildlife counts - both aerial and ground - in Meru Park is crucial given its chequered history. In the 60s and 70s, the Park and its adjacent conservation areas had a rich variety of wildlife. Then, in the 80s, anarchy befell the area after an invasion by well-armed bandits who poached wildlife and also killed the local community. Huge wildlife populations were decimated eventually leading to collapse of infrastructure and tourism revenues drying up.

A rehabilitation programme initiated in the early 2000 also involved restocking of wildlife. The species moved in were elephants, rhino, reticulated giraffe, lion, leopards, Grevy’s and common zebra, amongst others and it is crucial to assess the populations of these reintroduced species. Ground counts usually provide more accurate data and are less costly comparable to aerial censuses, and it will be good to compare the data once analysed.

Just as human censuses are conducted, so should we regularly establish our wildlife populations particularly the large mammals like elephants and other herbivores, monitor their trends and distribution to enhance their protection.

Once the data for this aerial census is analysed, it will help KWS and other stakeholders develop strategies for species protection and reduction of human-wildlife conflict. It will also assist in making informed decisions on anti-poaching and law enforcement operations and to secure critical wildlife areas to enhance species protection.

While the census is integral to the conservation and management of elephants and other large mammals, the real challenge remains protecting them from challenges brought forth by land-use changes, climate change and other human activities.