It is disappointing to see London Zoo downplay a potentially very serious incident. If reports are accurate, Kumbuka made his way through two unlocked doors and entered a keeper area to come face-to-face with one of the keepers. While it is good that some of the more sensationalist media reports have been corrected, the fact remains that this incident was significant and could have ended very differently.

Reports are emerging in that a male gorilla named Kumbuka escaped from the ‘Gorilla Kingdom’ enclosure at London Zoo in the late afternoon of Thursday 13th October. While details of the escape are currently lacking, it has been reported that Kumbuka was recaptured after being tranquilised. Representatives of London Zoo have stated that the gorilla escaped from the indoor den into a secure keeper area.

Chris Draper, Associate Director for Animal Welfare and Care at the Born Free Foundation, said: “While we are relieved that this incident apparently ended without  injury to visitors or to Kumbuka, it is yet another startling reminder of the risks associated with maintaining dangerous wild animals in captivity. This incident could have ended very differently.”

When the escape occurred, the Born Free Foundation was already in the process of investigating unconfirmed reports from a BBC journalist of damage to the perimeter glass at the gorilla enclosure and of a previous near-escape involving the gorillas.

Will Travers, President of the Born Free Foundation, said: “How many more times does this sort of incident have to happen? How many times must people be put at serious risk before what Born Free has been saying for years is acknowledged?: zoos simply cannot guarantee the safety of their visitors and their animals.“

The Born Free Foundation is calling for an urgent inquiry into the circumstances surrounding this escape, and into safety procedures at the Zoo. In addition, we are calling on the Zoos Expert Committee, the government advisory committee on zoo issues, to investigate the safety and welfare of great apes in UK zoos, and for the Zoo Licensing Act and associated standards to be amended to improve zoo inspection detail and frequency, and increase sanctions against non-compliant zoos. 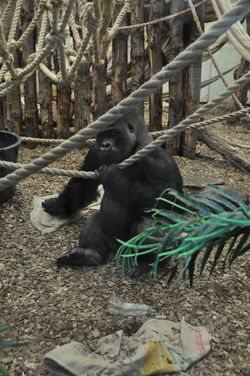 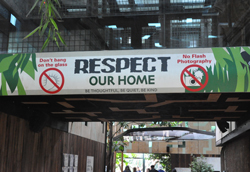