Regulations just published by the Norwegian government will effectively bring an end to the use of wild animals in circuses in Norway when they are implemented in January 2017. The Born Free Foundation has welcomed the news, which follows a series of false starts, whereby bans were mooted but fell by the wayside.

Chris Draper, Associate Director for Animal Welfare for the Born Free Foundation said: “Until now, Norway’s position on this issue was similar to that of the Westminster Government. Despite overwhelming support for a ban, promises from the authorities that action would be taken have failed to translate into meaningful change for the animals. We are delighted to hear the news that strict restrictions will be implemented early next year which, we hope, will have the effect of taking wild animals out of Norwegian circuses for good. We continue to call upon our own Government in the UK to do the right thing and follow suit”.

Legislation to ban wild animals in circuses in Scotland has been announced, but we are waiting on action in England, Wales and Northern Ireland.

To find out how you can help to bring an end to the use of wild animals in circuses in the UK, please visit our campaign page here. 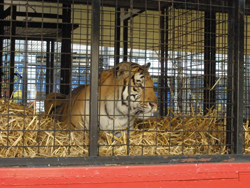