China’s mission to the European Union has urged the EU and European Countries to take ‘credible steps’ to effectively ban trade in ivory and ivory products.

In a letter to British Member of the European Parliament (MEP) Catherine Bearder, who chairs the MEPs for Wildlife group, China’s Ambassador to the EU Yang Yani described in detail the action China is taking to bring an end to the commercial processing and sale of ivory and ivory products. In December 2016 Chinese Authorities announced their intention to close down their domestic ivory trade by the end of this year.

Referring to the fact that trade in certain ivory products is still legal in certain European countries, the Ambassador also emphasised the need for international consensus and cooperation if the poaching of Africa’s elephants is to be brought to an end.

Born Free’s Associate Director Dr Mark Jones said: “The slaughter of elephants will only stop when the demand for ivory ends. To end demand, we have to make ivory unacceptable, taboo, and worthless, and we can only do that when there is no legal trade. China has shown it is prepared to take the necessary action, and Europe must follow China’s lead.”

Elephant populations across Africa have plummeted from maybe 10 million a century ago, to less than 500,000 today. At least 20,000 elephants are being slaughtered for their ivory each year by poachers, and populations continue to fall by around 8% annually. If this decline continues, elephants could disappear altogether from much of the African continent over the coming years. The involvement of organised criminal networks in elephant poaching and ivory trafficking also risks social, political and economic instability in some of the most vulnerable parts of Africa.

International commercial trade in ‘new’ ivory was effectively banned by the Convention on International Trade in Endangered Species in 1989. However, markets for ivory continue to flourish in many countries. The United States introduced a near-total ban on ivory trade in 2016, and China and Hong Kong have committed to closing their domestic markets. However, the EU and UK continue to permit internal commercial trade and exports of worked ivory items obtained prior to 1947. The substantial scale of this legal trade fuels demand and provides opportunities for new ivory from illegally killed elephants to be ‘laundered’.

Born Free is calling on the UK and EU to introduce comprehensive bans on domestic ivory trade and exports, sending a strong and clear message to consumers that the trade in ivory from any source is unacceptable.

“The authorities in London and Brussels like to claim a leading role in tackling illegal wildlife trade at an international level”, continued Jones. “If these claims are to have any credibility as we move towards next year’s high level conference in London on wildlife trafficking, the UK and EU must take action on ivory. Otherwise we risk being left behind as China and the United States take the initiative.” 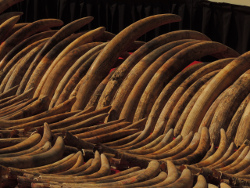