A scientific paper, co-authored by two members of Born Free’s conservation team, is published today in Science. The paper explains that the range of behaviours exhibited by chimpanzees is reduced by up to 88% in areas most affected by people

Chimpanzees do things in different ways to each other – including ways in which they find and eat termites, ants, algae, nuts and honey, or the way they use of tools for hunting or digging for tubers. Some populations throw stones at trees, while others shelter in caves. Many of these behaviours are assumed to be passed down from parents to offspring and can vary between family groups, supporting the existence of chimpanzee cultures.

Just like many endangered species, chimpanzees are under enormous pressure from human activities. Aside from being direct targets of hunters, their prime habitat – tropical rainforests and savannah woodlands – is being lost to agricultural farmland, plantations and settlements, or otherwise degraded by the extraction of natural resources.

An international research team, including Born Free’s Conservation Programmes Manager Nikki Tagg and Field Conservation Assistant Emily Neil, investigated the effect of human population density, the presence of roads and rivers, and the extent of forest cover on the occurrence of chimpanzee behaviours.

The team compiled a huge dataset on 31 behaviours across 144 chimpanzee groups, located across the range of wild chimpanzees from west to east Africa. This involved extensive field work at 46 locations, in 15 countries, over the last nine years. In a new report released today, it found that chimpanzee behavioural diversity was reduced by up to 88% in sites of higher human impact compared to sites of minimal human impact. 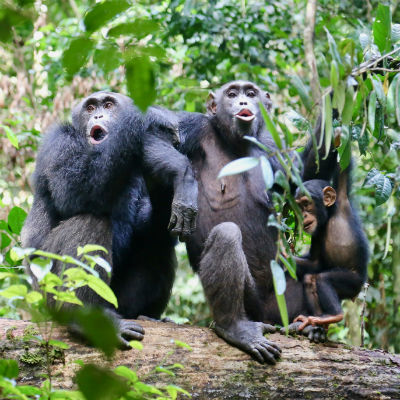 “I worked for the Pan African Programme at the Max Planck Institute for Evolutionary Anthropology,” says Born Free’s Field Conservation Assistant, Emily Neil. “As part of this study, I established and managed a temporary research site in north west Gabon and collected ecological, social, and behavioural data on a population of the endangered central chimpanzee sub-species. Habitat loss and bushmeat hunting are two of the main threats to central chimpanzees, and this is certainly the case even in strongholds like Gabon. However, the full scale of the anthropogenic impacts and their effects on chimpanzee behavioural diversity throughout Africa is staggering.”

There are a number of reasons why this might happen. As we already know in humans, it is easier to keep hold of cultural traits when living in bigger groups – shrinking chimpanzee populations may be leading to a loss in behaviours. It is also possible that chimpanzees are avoiding conspicuous behaviours that might alert hunters to their presence, such as the noisy activity of nut cracking. Also, habitat degradation and an unpredictable availability of food resources as a result of climate change, may also reduce opportunities for learning between generations. It is likely that a combination of these mechanisms is at play.

Born Free’s Conservation Programmes Manager, Nikki Tagg, adds: “The paper suggests that conservationists should think about protecting behavioural diversity as well as biodiversity. There are many culturally rich wildlife species as well as chimpanzees, such as other primates like orangutans and capuchin monkeys, and also whales. The paper highlights the importance of places in the world with exceptional sets of behaviours, suggesting that their protection should be ensured as ‘cultural heritage sites’. Born Free’s conservation team continues to work on conservation issues around the world."