VANCOUVER AQUARIUM ANNOUNCES END TO THE KEEPING CETACEANS IN CAPTIVITY

A recent decision to end the keeping of whales and dolphins (cetaceans) at Vancouver Aquarium, Canada, comes after years of pressure from the public, and was galvanised by the deaths of five cetaceans within a 15-month span.

Whilst the decision has generally been met with praise, it has been confirmed that the Aquarium intends to continue to keep rescued cetaceans on display to visitors at its site in Stanley Park: the Aquarium has applied to build a new tank, specifically for the display of cetaceans “rescued” in the future which are deemed to be non-releasable. Animal protection organisations are calling for non-releasable cetaceans to be cared for in sea sanctuaries or off-site  facilities away from public display, and for this also to apply to the Aquarium’s last remaining cetacean, Helen, the Pacific white-sided dolphin.

‘It is extremely disappointing that Vancouver Aquarium is already laying plans that seemingly contradict the recent announcement about ending the keeping and display of whales and dolphins’ said Samantha Goddard, Programmes Officer at the Born Free Foundation. ‘Keeping rescued cetaceans in land-based tanks – which have proven so inadequate over the years - is ill-conceived. The Aquarium should focus on finding a long-term solution for Helen, and the captive industry should come to terms with the fact that displaying cetaceans in barren tanks is widely regarded as unacceptable.” 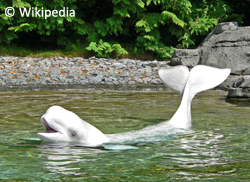