CECIL’S DEATH SHOULD NOT BE IN VAIN

On the Anniversary of Cecil's death, Born Free calls for an international moratorium on trophy hunting

On 1st July 2015, Cecil was brutally killed in Zimbabwe by American dentist and trophy hunter Walter Palmer. Cecil had been radio-tracked and studied by a University of Oxford team since 2008 as part of a long-term wild lion research project. But he was lured away from the protection of Hwange National Park, shot by a bow and arrow and died 40 hours later. News of his death went viral and rocked the world, prompting an unprecedented outpouring of grief for the 13-year-old lion.

Now, one year on, Born Free is calling for countries worldwide to bring this cruel, damaging and wholly unacceptable practice to a permanent end, and instead find humane, effective and sustainable solutions to the threats facing lions and so many wild species.

Will Travers OBE, President and CEO of Born Free Foundation, said: “We have been working to bring the brutality of this so-called ‘sport’ to the attention of policymakers, enforcement bodies, and the public, for many years. Horrific though Cecil’s killing was, it has turned the spotlight on the cruel reality of trophy hunting, and has helped to dispel the myth that the killing of wild animals for 'fun' by a tiny minority of wealthy Westerners significantly benefits wildlife conservation or local communities.”

In September, representatives from the 182 member Parties (countries) to the UN Convention on International Trade in Endangered Species of Wild Fauna and Flora (CITES) will meet in Johannesburg, South Africa, to debate many issues including the future protection of lions and the rules governing the export of hunting trophies. Born Free is supporting calls from a number of concerned African nations for the uplisting of Africa’s lions to CITES Appendix I, which would effectively ban all commercial international trade in lions and parts and products derived from them, and place far greater restrictions on the hunting trophy industry.

Significant action has already been taken by some countries since Cecil’s death. France announced a ban on lion trophy imports in November 2015, and The Netherlands announced a ban on the import of hunting trophies from around 200 species, including lions, in April 2016. In January 2016, the US Fish and Wildlife Service (reacting to the news that there may be as few as 20,000 wild lions left in all of Africa) added lions to the Endangered Species Act, making it more difficult for American lion trophy hunters to ship their trophies home. A host of airlines have also banned or restricted the carriage of hunting trophies, and the death of Cecil was cited by a number of officials in relation to the development and adoption of the United Nations’ Resolution on Wildlife Trafficking.

Travers added: “The sense of moral outrage that species such as lions, elephants - even rhino - can still be shot for 'fun' is sweeping the world. Just as the story of Born Free changed the way people looked at lions, and Blackfish has hastened the end of the exploitation of dolphins in captivity, so Cecil's tragic death may yet deliver a world that is a little safer for wild lions.” 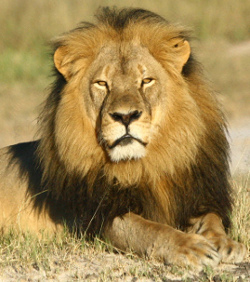