Born Free is delighted to announce that it has recently relocated a lion from a captive breeding facility in South Africa. While this may be a single success, today we are continuing to push the South African government to close down its captive lion breeding and canned hunting industries altogether and for public support to back our petition.

Canned hunting is the killing of captive-bred animals in a confined area from which they cannot escape, by fee-paying trophy hunters. Shockingly, this practice is still legal, and the commercial captive lion breeding industry in South Africa continues to grow.

It is now estimated that more than 8,000 captive-bred lions are currently being kept in more than 250 intensive lion breeding facilities, with these animals being exploited for profit at every stage of their miserable lives.

The lion rescued by Born Free has had to be nicknamed ‘Hilts’ (inspired by the character’s name in the classic book and film The Great Escape) as, due to the brutal and dangerous nature of the canned hunting industry, his real name and current location cannot be revealed.

‘Hilts’, like all other lions in captive breeding facilities, was most likely taken from his mother at just a few days old and hand-reared by unwitting, paying volunteers. Tourists would have paid to take selfies while petting him, and when he became older, to walk with him. It is likely he would have also been used for breeding purposes.

At this stage in his life, many lions in his situation would be transferred to canned hunting facilities to be shot by paying hunters and their bones and other body parts sold for traditional medicines, but this is where ‘Hilts’’ life changed. ‘Hilts’ was rescued and is now in Born Free’s care. 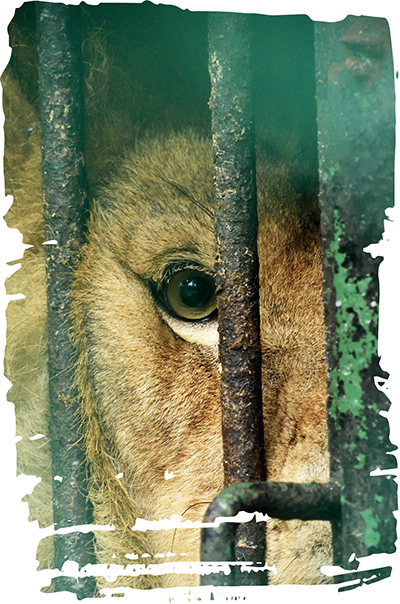 Howard Jones, CEO of Born Free, said: “Hilts is the lucky one. His future was a bullet, an arrow, a spear, or whatever weapon his killer would have paid to use. Now it’s a life free from harm, but that’s not the case for thousands of other lions suffering in South Africa’s canned hunting facilities. We are doing everything we can to ensure that the South African government changes its approach, to stop inflicting this unnecessary evil on so many innocent animals. But we need public backing now more than ever. I ask anyone reading this to take action – sign our petition, and not visit these ‘tourist facilities’. Use the power of social media and speak out against these barbaric hunters who want easy fun from shooting animals in enclosures. Support us if possible – whatever the action, we must not stop until these disgraceful, and somehow still legal, facilities are closed forever.”

Dr Mark Jones, Head of Policy at Born Free, added: “Lion farmers claim they are fulfilling demand by allowing people to pet lion cubs, walk with lions, bottle-feed cubs, and also shoot animals in canned hunts but the exploitation of captive-bred lions doesn’t end when a lion is killed. South Africa has been exporting lion bones and skeletons from captive lion breeding facilities since 2008 and between then and 2015 it declared exports of more than 5,000 lion skeletons, most of which were shipped to the Far East.

“Last year, a parliamentary committee called on the South African government’s Department of Environmental Affairs to bring an end to the captive lion breeding industry. Yet, in March 2019, the government ignored the committee and retrospectively issued permits to what had previously been illegal breeding farms. At the end of the day, responsibility rests with the South African government to close down its lion breeding and canned hunting industries, to bring an end to the international lion bone trade, and to ensure the process is conducted humanely and compassionately for the animals concerned.”