Born Free is delighted to announce that lions have been discovered for the first time at Mpem and Djim National Park in southern Cameroon.

The incredible discovery was made by a team led by Dr Hans Bauer of University of Oxford’s Wildlife Conservation Research Unit (WildCRU) – supported by Born Free, the German development cooperation GIZ, and Cameroon authorities – after rumours of the lions’ existence was reported to the park’s warden.

The nearest known lion population is 300km to the North (Faro National Park). To experts it seemed impossible that lions could have dispersed across the intervening human-dominated landscapes all the way to Mpem and Djim National Park.

Even less likely was the idea of lions roaming in the park’s mosaic landscape where large savanna areas are dominated by forests. 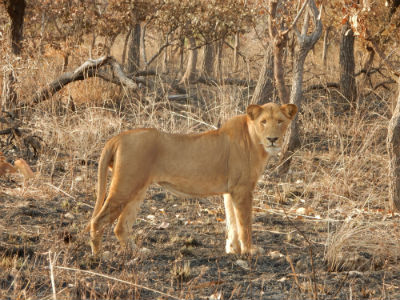 Bauer’s team looked for tracks, established camera traps, investigated prey kills and put out ‘call-ups’ to attract lions with sounds played at high volume. They soon found lion tracks and cattle with lion bite marks and, on day 10 of their mission, finally encountered two male lions thriving in the area.

"The most common image we conjure up of lions in Africa is these great felines dozing off during the heat of the day, against a vast background of wilderness. Yet, a large proportion of the continent’s remaining lions live in human dominated landscapes, keeping a low profile and avoiding contact with people,” said Professor Claudio Sillero, Born Free's Chief Scientist. “Finding these lions so far away from their established range in northern Cameroon has been the nicest lion news I have had in a long while, proof of their adaptability and resilience.”

Whilst the discovery is welcome news for our long-suffering animal kingdom, it won’t be plain sailing for these lions until effective action is taken with Bauer stating: “Lions are threatened across their range, but particularly so in Central Africa, and if these two lions are the pioneers of a new population that would be amazing. However, they are currently spending most of their time outside the park and mostly killing livestock, so we need to act urgently.”

Bauer continued: “The Ministry has given orders to prepare for a translocation and for improvements to park management, to enable possible lion colonisation of the park. GIZ’s programme of ‘Forestry and Environment’ is considering eco-development projects in the buffer zones that will integrate livestock protection. Mpem & Djim is only 200km from Yaounde, Cameroon’s capital, and the construction of a road connecting to the park is currently underway; a park with lions, chimpanzees, forest elephants and rich in biodiversity could potentially be secured and supported by tourism.”