Born Free’s Associate Director of Conservation Africa, Liz Greengrass, recently returned from Southwest Cameroon, where she was introducing her Elephant Guardian Programme in communities around the Banyang-Mbo Wildlife Sanctuary - here are her thoughts on tackling bushmeat hunting in the region.

'The trek to Tangang, a remote village in southwest Cameroon, takes nine hours and it’s not without event. After six hours at Etiwang we face crossing a swollen headstrong river. “I don’t think I can make it,” I say to my two assistants, Denis and Felix, as I measure the strength of the current with my eyes, whilst waif-like village boys skilfully fight it to carry our bags across. “Don’t worry, we’ll go across together. We’ve both got you,” They say, brushing off my concern. But as we start, wading out up to our chests, my legs are immediately claimed by the current and go out from under me, and I feel my fingers slipping through Felix’s. I note the funny expression etched across his face. He’s frowning and his lips are pursed but (worryingly) he is refusing to look at me. “Felix!” I cry, before a 15 year old youth swoops in efficiently, scoops me up about the waist and drags me across.

After eight hours I have a locally made rattan hammock bridge to contend with, which is rapidly unravelling and slowly rotting after a season of rain. “I’m worried you might not be able to cross it,” On of the porters, Peter, says condescendingly, suggesting that I might be too scared to try. “Well, I have no choice, do I Peter,” I sniff. “We’ve been on the road for eight hours, night is falling and I can hardly turn back now.” By the time I make it to the far end of what is effectively a tight-rope, I realise that my progress has been closely critiqued by an audience of locals. 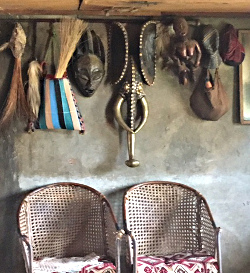 In Tangang, our presence proves controversial. You can cut the ambivalence with a knife. The elders don’t even break a cola nut for us, but at least the wisdom that comes with old age dictates that they are willing to hear what we have to say.  A contingent of young men loiters in the doorway like swash-buckling mutineers, heckling the old men to send us away, while Felix is reminiscing of the time he brought his first white visitor to the village twenty years before: (he got the full works: feasting, traditional dancing, singing). It’s a low point. The days when NGOs were welcomed with open arms are gone, replaced by scepticism and a perception that they come and go and never live up to their promises. Physically exhausted, I realize my best and only defence is my very thick skin.

We are here to introduce our Elephant Guardian programme – to request that communities around the Banyang-Mbo Wildlife Sanctuary that were traditional hubs of elephant poaching, tolerate the remaining elephants in return for community assistance. No one really knows how many elephants remain or whether the remaining population is viable. It’s a last-ditch attempt to garner support for elephant conservation before it’s too late around the sanctuary and across the greater landscape to Korup National Park. Tangang lies close to a still active elephant ‘market’ – a traditional place where elephants gather to ingest soil and socialize – so it’s a key community to focus on. It used to be notorious for poaching – hosting poachers from the Francophone regions – but now, as the elephants have declined, no incidents have been reported for the last five years. The greater issue is the swash-buckling mutineers hanging from the doorpost.

Every young man in Tangang is a commercial bushmeat hunter. Despite the rules governing the wildlife sanctuary, which do not permit gun hunting or hunting on a commercial basis, every day, these men freely march into the forest with their guns and their packs of dogs, then march back out a few days later to hit a nine hour trek to the main motorable road to sell their wares. Their trade is indiscriminate and unsustainable. Ten years ago, Banyang-Mbo was a significant site for the Nigeria-Cameroon chimpanzee; today this is not the case. A favourable exchange rate has driven a market for chimpanzee fetishes over the border in Nigeria; chimpanzees are not being killed for meat but we suspect, for their hands and feet.

The old men address the issue of bushmeat hunting almost immediately. “We know our hunting is causing the declines in the wildlife in the sanctuary,” they start, “So provide our young men with an alternative and they’ll stop hunting.”

I am a little taken aback. This is the first time in over a decade of working in West Africa, where a hunting community has freely admitted its overexploiting wildlife. The prevailing attitude elsewhere is that the wildlife will never run out and its absence in a locality only means that it’s ‘moved away’.

Despite their insight, I realize that they are holding the sanctuary to ransom in an attempt to broker a deal. In the hinterland, where opportunities are few and poverty rife, I can’t blame them for that. However, the sanctuary was created in the recognition that people were dependent on its resources, and could continue to depend on them if they were managed well. Sustainable management has always just remained an aspiration however; the regulation and control required is consistently absent at both village and government levels. The relationship between people and natural resources has always been an exploitative one.

“You tell me what alternatives your hunters are after,” I respond. “Ask your hunters what other professions they want to learn and what will enable them to turn a good profit with minimum investment.” For I know that it doesn’t matter what you train a hunter in, at some point he will revert back to hunting, because bushmeat hunting is a best adaption to an environment of day long treks and no motorable roads, restricted commerce, unfinished education and limited livelihoods. NGOs that dabble with pig farming and vocational training are on a hiding to nothing in terms of reducing hunting pressure and this effectively renders people like me powerless, for if there was a viable alternative, I’d be doing it.

Another reason why young men turn to hunting is that there’s no one stopping them.  If the deterrent was large enough no one would be hunting inside the sanctuary with a gun. Effective law enforcement is the only way to stamp out the increasing human pressure on protected areas, but in West Africa effective law enforcement rarely exists and people have little faith in the law enforcement agencies; the notion that law enforcement is there to serve the people is absurd, they are there to serve themselves. (Get stopped at a West African road-block and you’ll know what I mean). Cameroon’s protected areas are given inadequate budgets to cover the operational costs related to law enforcement on top of staff wages. Where NGOs assist in this regard, the relationship is often tenuous; the international community demands a level of governance and accountability that is often absent and government feels policed. If they don’t demand accountability, the money gets chopped, eaten away for personal endeavours, at the cost of ‘boots on the ground’. At other sites in the region where I’ve worked, park wardens exclaim that we must find alternatives for hunters, as if their role is the social cause of hunters and not protecting wildlife and its habitat against exploitation. I am left wondering who exactly has the interests of wildlife at heart.

Attempts to regulate bushmeat hunting are equally absurd; mostly because policy advisors live in a highly regulated environment while hunters do not. Policy papers on this issue are unconvincing – a wrestle of hard worn words that generate more questions than answers; regulation requires proper implementation and tight enforcement, things that are rarely present in rural Africa.

Since 2008, Rwanda has successfully banned the plastic bag and this year Kenya followed suit; the illegal possession of this piece of contraband can allegedly end in a draconian four-year jail sentence or a $40,000 USD fine. So if African nations can effectively ban the plastic bag, surely they can take a stand and ban civilian gun ownership? Gun amnesties do not work; they only create a counterproductive market. Prohibiting the manufacture of guns and civilian gun possession does require enforcement – and in rural areas this is admittedly challenging - but it is the simplest way to reduce commercial bushmeat off-take to more sustainable levels.'

Sadly West African governments are unlikely to do this any time soon. In the new world of oil production and shadow governments, civilians are continually forgotten. Informal sectors, such as commercial bushmeat hunting thrive and fuel the local economy. It is an inconvenient truth that bushmeat hunting is alleviating poverty; the informal sector is the mark of the resilience of the people.

It would require a truly democratic elected government that was genuinely concerned about the welfare of its people to implement policies that could be construed as disfavouring the population in the short-term, but the current incumbent has been in office for over 30 years and isn’t letting up.

So when you grow tired of reading about the increasing loss of biodiversity, don’t shake your head and wonder what the wildlife conservation NGOs are doing about it. Understand only that the state of our environment reflects the state of our world: the way it is developing and the way it is or is not being governed. Some problems in Africa don’t have simple solutions; they are merely symptoms of even greater ones.