We recently introduced two of our rescued lions – Brutus and Queen – so they can live together at our Big Cat Rescue Centre at Shamwari Private Game Reserve in South Africa*.

The introduction took a great deal of careful planning and work. Queen lived in an enclosure alongside Brutus for several months before the pair were fully introduced. This allowed them to meet and spend time in each other’s company first, with the safety of a fence between them. During this time, the team observed Queen and Brutus to assess whether or not the pair could be compatible to live together. After careful consideration, two weeks ago, we opened up the enclosure and Brutus and Queen are now living together peacefully.

Maggie Balaskas, Born Free’s Animal Rescue and Care Manager, said: “The Animal Care team at Shamwari spent many months observing Queen and Brutus, as they got to know each other as neighbours.

"We were delighted such positive interactions were observed between the pair from the initial stages of their introduction. Brutus and Queen seem to be very relaxed and content in each other’s company and we are pleased they both have companionship again.” 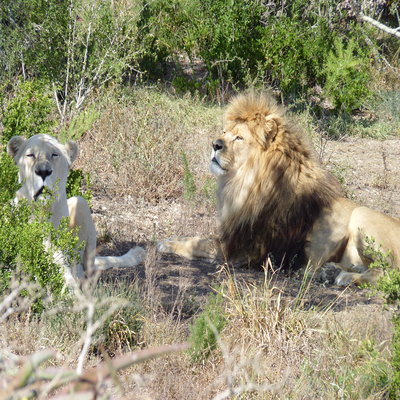 Glen Vena, Born Free’s Animal Care Manager, added: “I must admit this was a very nervous time for us all here at Born Free. We double-checked everything and made sure everyone knew what their role was and, when all was ready, the big moment happened. Queen was so brave. She took the first steps into Brutus’s section. I’m happy to report that they are both well and seem very happy together.”

* None of our rescued animals in permanent care are allowed to breed. We vasectomise males or spay/give hormone implants to females. We do not want to add to the captive population, plus sanctuary space is in short supply, so we keep these precious spaces for animals most needing rescue.