Scientific investigations have concluded that whales, dolphins and porpoises (collectively known as cetaceans) do not fare well in captivity, where the lack of space and complexity causes these intelligent animals to develop anxieties, abnormal behaviours and early mortality. These facts have recently been supported by 21 eminent marine biologists, who have signed a statement stating that science no longer justifies the use of cetaceans for entertainment purposes.

Travel companies however continue to promote captive dolphin attractions, seemingly oblivious to the science and the public concern.

The Born Free Foundation has chosen to work constructively with the travel industry and seeks to convince tour operators and travel agents to encourage attraction suppliers to improve animal care standards in the short-term and phase-out the commercial dolphinariums in the long-term.

Whatever your approach, please be polite, and encourage tour operators that continue to promote captive dolphin attractions, to work with NGOs, such as the Born Free Foundation, to identify a more compassionate future for cetaceans. 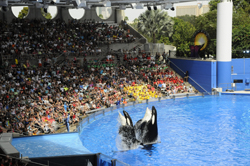