Outdated legislation, which has regulated dolphinaria in France since 1981, has finally been updated and includes a breeding ban for captive dolphins across France.

Born Free and our NGO friends; One Voice in France and the Dolphinaria-Free Europe coalition, are thoroughly delighted to hear that the current captive whales, dolphins and porpoises (collectively known as cetaceans) in France will be the last.

Born Free has long been opposed to the captivity of wild animals and continues to call for an end to this practice, whilst calling for greater legislative protection and higher welfare standards for captive cetaceans across Europe. Born Free also continues to facilitate concepts for cetacean sanctuaries as part of the #SanctuariesNotTanks campaign. 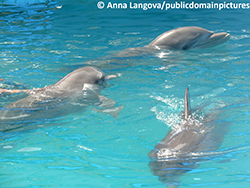